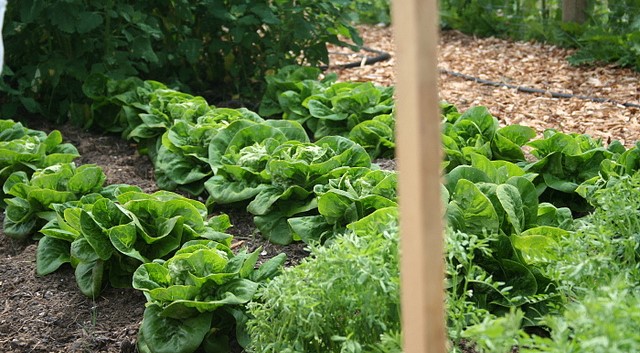 "Classrooms, as great as they are, some of the learning is artificial. And in that artificial space, you're trying to teach them about the world," Pershing principal Margarita Hernandez said. "School gardens are trending, but they're trending for the right reasons. It's a lot of social, emotional balance and multisensory connections to everything you do." (urbanfoodwarrior, Flickr/Creative Commons)

“First you dig a little hole. Then you drop some seeds in there,” said Karmen in a sing-song voice with a chorus of other John J. Pershing Elementary first-graders.

She continued with the song, “Cover them with lots of dirt. Give them water, song and care.”

In the hole, she placed three seeds, smoothing a blanket of soil on top and then shoving her dirt-stained hands in the pockets of her black hoodie that covered a head of braids.

Eventually, sprouts of green — early signs of leafy spinach — will poke through the ground of this school garden. Nearby, dark green zucchini squashes larger than the size of a ruler overflowed from a wooden trough bed.

“Spinach is my favorite food … vegetable,” said Karmen, correcting herself.

It’s been five years since Pershing Elementary teachers, parents, volunteers and students planted this outdoor space in a courtyard of the Preston Hollow school. Follow the stone pathway lined with boulders past the chicken coop, small pond and knock out rose bushes to a covered outdoor classroom with tree stumps for chairs.

On school breaks, teachers and administrators volunteer to tend to the garden, pulling weeds and feeding the chickens.

“Classrooms, as great as they are, some of the learning is artificial. And in that artificial space, you’re trying to teach them about the world,” Pershing principal Margarita Hernandez said. “School gardens are trending, but they’re trending for the right reasons. It’s a lot of social, emotional balance and multisensory connections to everything you do.”

In 2011, Pershing was one of the first REAL School Gardens planted. The Fort Worth-based nonprofit partners with high-poverty schools to create learning gardens and train teachers on how to use them to improve student engagement and academic achievement.

Since then, the organization has planted more than a hundred gardens in Texas, including one in November at John H. Reagan Elementary in Oak Cliff.

Pershing sits on a tree-lined street across from the neighborhood where former President George W. Bush and Laura Bush live.

But the school’s students aren’t raised in the upper-class homes that surround the school. At Pershing, about 90 percent of students are low income and more than 60 percent are English Language Learners, according to the school’s 2014-2015 Texas Education Agency report card.

“My kids are growing up just looking through life really through a window,” Hernandez said. “They go from door to door. And when you go door to door, how enriching of a life can you have if you don’t go out and explore?”

Ask Karmen about the garden, and she’ll tell you not to go near poisonous plants, eat vegetables so you “stay healthy” and that tadpoles live in the pond.

And she’ll talk with enthusiasm about a butterfly she followed as it fluttered to its perch on a flower.

“We can’t feel pictures because the pictures aren’t real,” she said. “Outside, you can feel it.”

Organizations and studies report a list of long list of benefits to school gardens. According to REAL School Gardens, many students’ standardized test scores increased up to 15 percent, with science scores increasing the most, after a garden was planted. The organization also reports that gardening helps kids choose healthier snacks and learn about nutrition, and it reduces symptoms of ADD, ADHD and stress.

Hernandez has seen subtle behavioral difference in her Pershing Elementary students firsthand, calling the garden a “safe” and “soothing” place that makes it easier for anxious or quiet kids to talk. If she has to discipline a child, she doesn’t talk to the student in her office; she takes the child to the garden.

“It’s more effective there. What is this office going to do? It’s going to create stress, anxiety, shut down,” she said. “There’s nothing worse than that.”

Now, there are more than 7,000 school gardens in the country, according to the U.S. Department of Agriculture’s Farm to School census.

“You see it exploding now because of the obesity epidemic in kids and food deserts in areas of need,” said Jeff Raska, a project specialist at Texas AgriLife Extension Program, who has helped plant gardens in Dallas County and built the chicken coop for Pershing’s garden.

A teacher in the 1990s, Hernandez planted small, raised bed garden outside her portable to teach students math and science lessons

“With those gardens, once the person who’s the driving force behind it leaves, if no one else has the same passion, those gardens go to waste, they’re not kept up and soon they’re dismantled,” she said.

REAL School Gardens reports that about 97 percent of its gardens are still in use, including some planted a decade ago.

“At schools where the garden is being used regularly for instruction, it becomes embedded in the culture of the school like a computer lab or a library,” Feille said.

In East Dallas, Stonewall Jackson Elementary’s 20,000-square-foot garden of native wildflowers, vegetables and chickens has grown for two decades behind a chain link fence at the school.

“People see the benefit in how it crosses into things students write about and research,” said Jennifer Mulligan, president of the Stonewall Gardens Board. “You see how it becomes a holistic education, and it’s just because you sent them out into the garden.”

The volunteer-led nonprofit that Mulligan leads financially supports the outdoor space, which has become a model for school gardens North Texas, after Dallas ISD cut funding for the program in 2009 during a budget crisis.

Raska stressed that successful gardens like Stonewall’s need a garden committee, a funding stream — which at Stonewall helps pay for an outside maintenance crew — and a plan to integrate the garden into the school day.

“A garden isn’t for everybody,” Raska said. “You don’t build gardens just to be pretty. You build a garden to teach out of.”