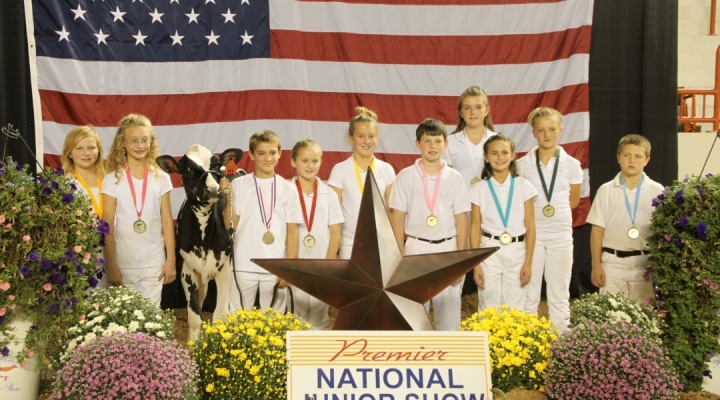 Many exhibitors in the Top 10 of each age group have been competitive each year, often returning to win their division. Walton believes that is a testament of the quality of the show – that the good showmen continue to sort themselves to the top, and the different judges recognize their abilities year after year. Above: The Junior Group from 2010. (Courtesy Photo)

HARRISBURG, Pa. — When Aliene and Harry Thompson of Carlisle, Pa., went to World Dairy Expo to watch their grandchildren compete in 1993, they came home with an idea. The All-American Dairy Show needed a showmanship contest.

The Thompsons enlisted the help of daughter Kathy Walton to put the event in motion, and after four years of planning and preparation, the father-daughter duo attended the All-American Dairy Show Advisory Committee meeting to pitch the concept.

They were asked “who is going to do this?” and told “you have to get new sponsorship money” to start the contest. They said, “we will” and they did.

In 1997, with less than $1,300 in sponsorship, the first Youth Showmanship Contest was born thanks to many sponsors who continue supporting the contest today. The basic concept remains the same – the age groups are juniors ages 8-11; intermediates ages 12-15; and seniors ages 16-21; and depending on the number of entries, they’re divided into heats. Each division finishes with a Top 10, and the seniors then compete in a fitting competition.

Justin Burdette of Mercersburg, Pa., was the first senior to win the contest in 1997, from among 203 competitors.

“It was rewarding to go through all the steps that day and be selected as the winner of the first contest,” said Burdette. “The contest is an excellent experience for all kids, and no one is too good to participate because you can learn something every time you step into the ring.”

For many years, the Thompsons and Waltons provided the 10 heifers for the senior fitting competition. Walton said her father set very strict guidelines for himself to give all the contestants a level playing field – not all black or all white heifers, each was halter broken, and heads were clipped before they arrived. Eventually, other local farms offered to bring heifers and continue to do so. This year’s heifers are being supplied by JoBo Farms in Gettysburg, Pa.

In the 25 years, more than 6,000 young showmen and women have walked through the shavings with the largest group in 2013 with 476 competitors! The intermediate division always has the most entries. Never fewer than 12-14 states were represented each year from Florida to Maine, in addition to Arkansas and Texas.

Many exhibitors in the Top 10 of each age group have been competitive each year, often returning to win their division. Walton believes that is a testament of the quality of the show – that the good showmen continue to sort themselves to the top, and the different judges recognize their abilities year after year.

One hundred judges have analyzed the exhibitors, with only a few repeat judges over the years. Walton tries to choose judges who don’t have to travel exceptionally far, so the sponsorship dollars can be used for the awards. This year, there will be nearly $8,000 worth of cash, prizes and neck ribbons distributed to the exhibitors, including coupons for every contestant to get a free milkshake from the PA Dairymen’s Association.

Never one to take all the credit, Walton appreciates her team led by Peggy Raub and Marel King who handle the bookkeeping and paperwork end of the contest. “I can’t say enough about their help and dedication to the contest since the start,” she said.

Contestants will also see many other familiar faces that help on show day – class starters Jane Pepple, Sharon Nolan, and Heather Weeks; and Walton’s sister Susan who keeps the heat lists organized throughout the contest. Walton’s daughter Betsy and her children have also been key supporters throughout the years.

“It’s been a true labor of love,” said Walton about the contest. “It would not have been possible to maintain this for 25 years without the help of our many volunteers and our very generous sponsors year in and year out.”

New this year, exhibitors were able to sign up for the contest online when doing their show entries. Walton wants to assure everyone that participants can still sign up at the show – she’s never turned an interested youth away from participating in the contest and doesn’t plan to start.

In honor of the 25th anniversary, Yoder’s Country Market in New Holland, Pa., is providing a free cupcake to each exhibitor when they check in for the contest on Saturday, Sept. 17, in the Equine Arena. On Sunday, Sept. 18, the contest will commence at 8:30 a.m., in the New Holland Large Arena.

More information about the Youth Showmanship Contest can be found at www.allamericandairyshow.com under “Contests & Forms.”