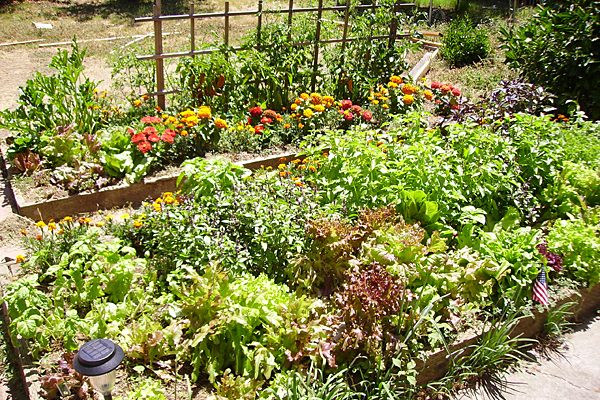 About 600 children visit the garden each year, including students from Highland Elementary and the Columbus Bilingual Academy. (Wikimedia Commons)

COLUMBUS, Ohio (AP) — After plucking a pair of leafy beets from the Hilltop Youth Garden, Diamond Demmons tried a slice of beet along with a carrot. The 9-year-old licked the beet as she held the small carrot in her other hand.

Asked if she liked the beet, she quietly said yes. Asked if it tasted like the carrot, she softly said, “A lot.”

“We have a rule in the garden,” said the garden’s educator, Jazmyn Benjamin. “You have to at least try it.”

It’s a green half-acre of beets and radishes, strawberries and rhubarb, asparagus and corn and sunflowers that produces 5,000 pounds of produce each year in one of the Hilltop’s grittiest areas. On one recent morning, a man from the neighborhood slept on a bench within a covered enclosure. The garden has been around since 2009.

“It’s like an oasis in the middle of the Hilltop,” said Peggy Murphy, a steering committee member for the garden.

“It started with a dollar and a prayer,” Murphy said, explaining that it cost $1 to purchase the property from the city’s land bank.

“The prayer was that children would be able to utilize our space.”

That they have. About 600 children visit the garden each year, including students from Highland Elementary and the Columbus Bilingual Academy. On one recent morning, a group visited from the Children’s Defense Fund’s Freedom School at Highland, a summer and after-school literacy program that also includes other things, such as visiting gardens.

Benjamin and others teach the kids how to plant radish seeds and how to pull beets. She teaches them different ways the vegetables can be used, including combining two roasted beets in a purplish dip of chickpeas, olive oil, garlic, lemon and zucchini.

The kids scooped it up with tortilla chips and seemed to like it. “They’re already interested in trying it,” Benjamin said of new things.

The program is funded by sponsors such as Battelle, the United Way of Central Ohio, the Franklin County Farm Bureau and a city community garden grant. The Mid-Ohio Food Bank gave a grant this year to help the garden operate year-round. Strader’s Garden Centers and the Ohio State University Extension provide in-kind services. Benjamin is the only full-time employee.

Leah Brudno is a part-time employee, an intern who helps Benjamin. She grew up on a farm near Amesville in Athens County, and wanted to help teach kids who are unfamiliar with how produce is grown.

“You ask a lot of kids where carrots come from, they say, ‘From the grocery store,'” said Brudno, a 21-year-old Ohio University graduate.

She said that people sometimes take flowers and vegetables from the garden, but said it’s not a common occurrence.

Geoff Phillips, president of the Highland West Civic Association, said the Greater Columbus Growing Coalition, of which the garden is a member, distributes flowers to residents from the garden site. “It’s a great addition to the neighborhood,” he said of the garden. “It gives the kids something to do.”

It gave Diamond Demmons lots to do. She led a visitor to a fence along South Highland Avenue, where she had planted a sunflower seed.

“I don’t know which one is mine,” she said as she looked among the yellow flowers emerging from the greenery.

“They’re going to be bigger than me.”