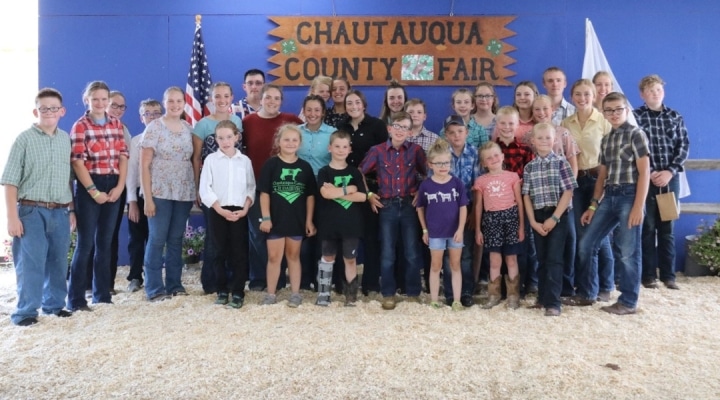 4-H Market Poultry Youth who each donated a pair of chickens this year to the Jamestown Community Learning Council. (Courtesy Photo)

JAMESTOWN, N.Y. — Cornell Cooperative Extension of Chautauqua County’s 4-H Program is humbled by the results of the 58th annual Meat Animal Sale that took place on July 22nd at the Chautauqua County Fair.

Local Businesses, 4-H supporters, and even 4-H alumni kept their hands flying the Friday of the County Fair. A small total of 116 animals were sold at the event with 16 beef steers, 31 pairs of chickens, 8 market goats, 47 hogs, and 14 lambs. Totaling a gross sale of $216,634.45. Twelve animals were resold, including a steer which has not happened in a long time, and one goat was sold a total of three times before exiting the ring!

The grand champion market hog shown by Lily Underberg sold for $6.25/lb purchased by Tony Staub, one of this year’s top buyers. Some other 4-H youth also had some great bids for their pigs. Young Lucas Overend sold his hog for $9.50/lb to Jim Quattrone, and Hannah Schauman had the highest selling hog at a record breaking $10/lb.

The grand champion goat led in the ring by Miss Lydia Covert was sold to Steven Brothers of Panama, NY. Mackenzy Graziano had the highest selling goat at $725 and purchased by a current 4-H family, Jen and Jeff Clark. Elizabeth Lindsey sold her goat to Eckman Insurance Company, then to Cattaraugus County Bank who also donated it back and, finally to Corbin and Lawson Reid.

Lydia Covert also held the spot of grand champion with her lamb sold to Kettlebrook Farm at $17/lb. Grady Huntington did well with his lamb selling it at $10/lb to JMI.

Lucas Overend’s grand champion steer was also the highest seller; Ag Team bought the steer at $6.50/lb totaling $8,391.50. Wyatt Harrington and Garrett Lesch both also had high sell steer purchased by Klingingsmith Plumbing & Heating and NOCO Energy Corp. R&R Landscaping, owned by Richard Syper, blew the crowd away when he bought Grady Obert’s steer and donated it back which later was purchased by the Godfrey Family.

This event would not have been made possible without the help of our local auctioneers who donated their time and did a fantastic job on keeping those bidders going. This year Dakota Peterson, Lon Kent, Ronnie Reed, Heath Reed, and Dale Eckman were the talented men running the show.

The 4-H Meat Animal Sale Committee and the 4-H Lead Educator, Lindsey Crisanti, would like to wholeheartedly thank the community for their support of 4-H. Raising market animals is much more than it sounds. It teaches youth responsibility, financial and time management skills, recordkeeping, and essential knowledge of the agricultural and food systems industry. 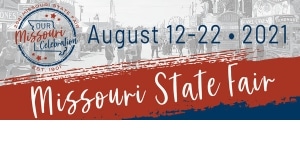 SEDALIA, Mo. — The Missouri State Fair celebrated youth in agriculture on Saturday, Aug. 21. The annual Sale of Champions highlighted the day, breaking records from previous sales, raising a total of $185,948 for Youth in Agriculture. The Grand Champion Steer was exhibited by Payton Rodgers of Savannah, MO. Payton is the daughter of Blaine […]