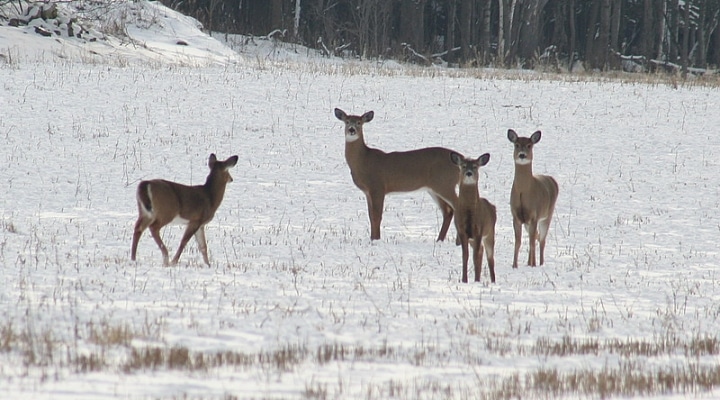 Juvenile white-tailed deer that strike out to find new home ranges — despite facing more risks — survive at about the same rate as those that stay home, according to a team of researchers who conducted the first mortality study of male and female dispersal where deer were exposed to threats such as hunting throughout their entire range. (photo by Bev Currie, Creative Commons/flickr.com)

UNIVERSITY PARK, Pa. — Juvenile white-tailed deer that strike out to find new home ranges — despite facing more risks — survive at about the same rate as those that stay home, according to a team of researchers who conducted the first mortality study of male and female dispersal where deer were exposed to threats such as hunting throughout their entire range.

Dispersal occurs when a juvenile leaves the area where it was born and moves to a new location where the young animal establishes its adult home range, explained Duane Diefenbach, Penn State adjunct professor of wildlife ecology. The instinctual dispersal of young deer from the area where they were born to a new home range protects the species’ gene pool from inbreeding with close relatives.

Diefenbach’s research group in the College of Agricultural Sciences has radio collared hundreds of Pennsylvania deer over the last 20 years, monitoring their survival, movement and behavior. Earlier research done by his lab, in collaboration with the Pennsylvania Game Commission, revealed that about three of every four young, male white-tailed deer disperse, with yearling female dispersal rates much lower.

Dispersal distances depend on forested cover, Diefenbach and colleagues demonstrated in previous research. But on average in Pennsylvania, males travel more than three miles, typically in direct, straight-line fashion; females that disperse often seemingly wander around before settling down an average of about nine miles from where they started.

“We wanted to know how risky dispersal is,” said lead researcher Eric Long, now a professor of biology at Seattle Pacific University, who was a doctoral degree student at Penn State advised by Diefenbach when early stages of the research unfolded. He was surprised to find no detectable increase in death among dispersing deer.

“We expected to find that dispersal results in added mortality because deer are traveling across unfamiliar territory and are more likely to encounter predators or vehicles,” Long said. “Going into this research, I expected to have a lot of our dispersers killed by vehicles as they were making the movement. We were surprised at how effective deer are at dispersing, especially when they have to deal with relatively modern risks like roads and hunting.”

For this study, researchers captured 398 juvenile male and 276 juvenile female white-tailed deer and compared survival rates of dispersers and nondispersers.

Juvenile deer were captured in the winter through early spring. At the time of capture, they were seven to 10 months old. For both male and female white-tailed deer, natal dispersal prior to 11 months of age is rare, Long noted, so capture between December and April decreased the likelihood of capturing juveniles that had already dispersed.

Results of the research, recently published in Ecology and Evolution, indicate that for both male and female yearlings, survival rates of dispersers — males 49.9%, females 64.0% — did not differ appreciably from those of nondispersers — males 51.6%, females 70.7%. Only two individuals, both female, were killed by vehicular collision during dispersal movement.

So, why do dispersing juvenile deer fare as well as nondispersers despite facing more risk? Researchers are not sure, but Long suspects that deer with the predisposition to be more adventurous might have a genetic makeup that helps them to avoid threats. Also, he said, there is some evidence to suggest that yearlings in better condition, with bigger bodies, are more likely to disperse than deer in poorer condition.

“It may be that only those deer that are up to the challenge of dispersal even try it,” he said. “Bucks, which are more likely to disperse, seem much more efficient at dispersal than females.  They don’t mess around and wander all over the place like does — and that likely decreases their risk.”