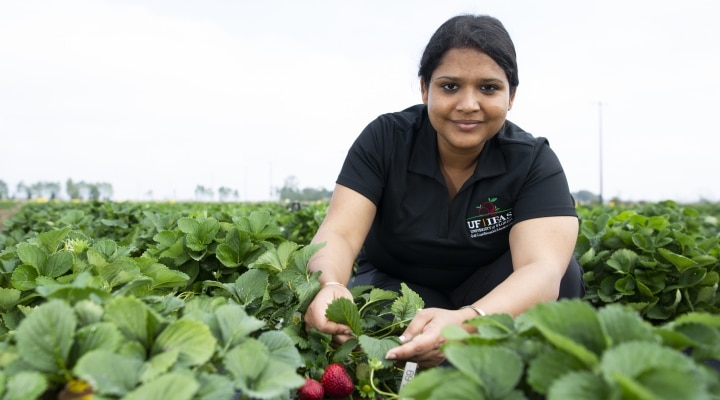 Growing up in India, Sriyanka Lahiri wanted to pursue a career in science, and importantly, found support from both her parents. But she credits her father, a chemical engineer, for encouraging her in scientific subjects as she went through school. (photo by UF/IFAS)

BALM, Fla. – Growing up in India, Sriyanka Lahiri wanted to pursue a career in science, and importantly, found support from both her parents. But she credits her father, a chemical engineer, for encouraging her in scientific subjects as she went through school.

“Despite his busy schedule, he always found time to touch base with me about my schoolwork,” Lahiri said. “I am an only child. I would get a lot of guidance from him with math, physics and chemistry. Dinner conversations would often circle around what I had learned in science that week. My father never thought it beyond my capabilities to pursue a career in a STEM field. More importantly, he always taught me to look at the brighter side of things.”

As we celebrate Women’s History Month in March, Lahiri’s journey reflects perseverance in STEM research. Her story is also buoyed by inspiration from various people in her life, many of whom are men.

Her support system starts with family. While she credits her mom for helping her through coursework in English, Hindi, history and other similar subjects, her dad helped her with the sciences. Lahiri also views her aunts as role models. All graduated from college with degrees in scientific fields.

Following her initial passion for biology, Lahiri earned bachelor’s and master’s degrees from the University of Delhi, India. In the final year as an undergraduate, she took a course in entomology.

“That class changed my life,” she said. “We went into bazaars and asked for tossed-away vegetables infested with insects so we could study them.”

She had found her calling – applied research.

After earning her master’s in India, Lahiri attained her doctorate from North Carolina State University. She dreamed of landing a postdoctoral research job right after getting her Ph.D. But that took five months.

“I thought my career was over before it started,” Lahiri said. “My biggest fear of becoming irrelevant was coming true, and my work VISA would run out even before I had a chance to prove myself.”

This time, her husband, Ananda Shankar Bhattacharjee, who was then a doctoral student at the University of Utah, kept her spirits up.

As a woman scientist, Lahiri still faces challenges: Sometimes, people underestimate her. They sometimes talk down to her, and she feels like there’s no room for her to make mistakes.

Now, in only her second year as an assistant professor, she shows wisdom beyond her years as she talks about being a woman in science. And yet, she keeps her advice simple.

“Just plow through obstacles,” said Lahiri, who spoke last month at the International Day of Women and Girls in Science 2020 seminar at the GCREC. She shared her experiences with a group made up mostly of female graduate students, who hung on her every word.

She left the audience with a few friendly tidbits of advice: Love your work; have fun with your friends and don’t give up.

“The best part of my career is when students and scientists who know me only through my research reach out to me from around the world, requesting access to my publications because it is useful for their research endeavors,” Lahiri said. “I am the beneficiary of immense encouragement and support. I strive to extend that to the next generation of young women scientists. That’s how I plan to pay it forward.”

UF/IFAS to explore how to support urban farming across Florida
August 5, 2020

Preparing for 2020 hurricane season in midst of pandemic
August 5, 2020