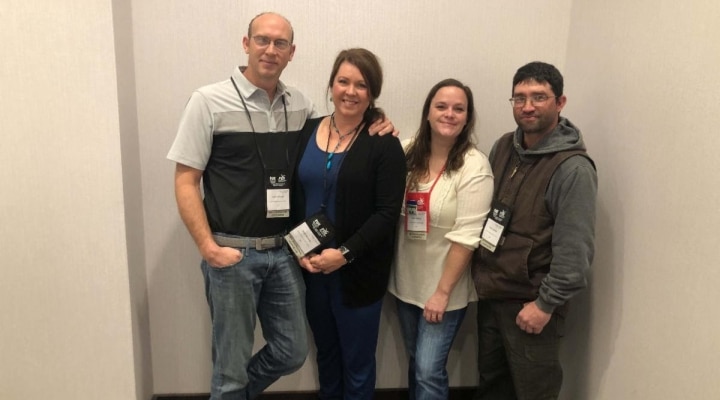 HURON, S.D. — During National Farmers Union Convention policy sessions, state’s delegates sit at tables in long rows, their state flags proudly displayed. As Karla Hofhenke, checked in with South Dakota’s delegates ahead of the 2022 session, she noticed something.

“I looked across the session hall and realized South Dakota had one of the youngest delegations,” said Hofhenke, Executive Director of South Dakota Farmers Union (SDFU). Hofhenke attributes SDFU’s ability to engage with the next generation of family farmers and ranchers to state programming designed to meet their leadership needs and production interests. She also credits the five-state Farmers Union Enterprise Leadership (FUEL) program.

“Looking at our current delegates, 11 of the 15 are current or former FUEL participants. And the newly elected NFU Vice President, Jeff Kippley is an alumnus. This shows our leadership programs are working,” said Hofhenke, who also serves as the 2021-2022 FUEL program coordinator.

Sponsored by Farmers Union Enterprises, the organization which oversees Farmers Union Industries, FUEL is designed to strengthen young producers’ leadership and communication skills. FUEL seminars are held throughout the year.

Each year, Farmers Union Enterprises sponsors 10 farm and ranch couples to participate in the program. Two couples are selected from each of the following states: South Dakota, North Dakota, Minnesota, Montana and Wisconsin.

“In a time when many agriculture organizations are concerned about the lack of interest in younger farmers and ranchers to take on leadership roles, we feel investing in the next generation is not only valuable to the future of family farming and ranching, but to the future of our organization as well,” explained Doug Sombke, SDFU President.

Meet the 2022 South Dakota FUEL Couples
Shilo and Ryan LaMont, Union Center, and Kelly and Curtis Johnson, Miller, were selected to participate in the 2022 FUEL class.

“We have been involved in Farmers Union for a long time and saw FUEL as a way to gain leadership skills for the next step,” explained Shilo LaMont.

Shilo ranches with her husband, Ryan, and his family. “Ryan and I feel strongly that if someone does not step up to the plate to be a voice for family ranching, our voice will not be heard,” Shilo said.

“I wanted to participate to learn more leadership skills,” added Ryan. He currently serves as President of Meade County Farmers Union and is the District 5 Vice President.

The couple have four children, daughter, Brooke, and two sons, Logan and Kole. They raise Red Angus cattle and sheep on land homesteaded by the family of Ryan’s stepdad, Dallis Basel, who also serves as District 5 SDFU board member. Over the years they have expanded their ranch – purchasing more land and growing their cow herd.

Curtis Johnson said he and his wife, Kelly, had similar reasons for wanting to participate. “Ultimately leadership is a staple that farmers need to have. It takes good leaders to have a strong community,” Curtis explained. “In the region where I live, where agriculture is the dominate workforce, if you have strong leaders in agriculture, then you will have strong schools and strong communities.”

Curtis is a fifth-generation farmer. He raises crops and cattle with his dad on the family farm near Miller. In addition to leadership skills, Kelly said she appreciates the opportunity to get to know other farm and ranch couples from across the region.

“It’s nice to know that we are not alone,” Kelly said. “Other farm and ranch couples can identify with not only the special and good things that come with having a family farm, but also the struggles we face.”

Curtis and Kelly have five children: Jesse Volek, Alexis, Brooks, Ava and Nikki. Their family and farm were featured in the January/February 2022 Union Farmer.

To learn more about FUEL and how to apply for the 2023 class, contact Karla Hofhenke, Karla@SDFU.org.