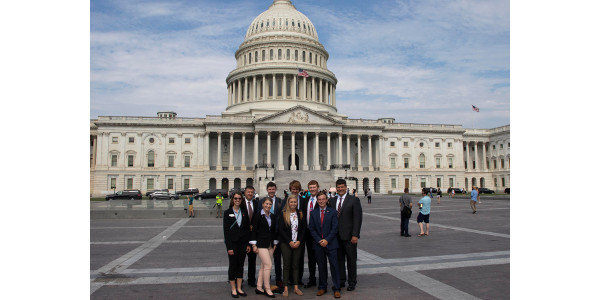 LINCOLN — Nine young leaders visited Washington, D.C. July 15-19, 2018 to learn about corn policy development, explore American agriculture outside of the Midwest, and visit with congressional leaders and agribusinesses. The trip was sponsored by the Nebraska Corn Board and is designed to encourage young leaders to take an active role in the agricultural industry.

“Through the Nebraska Corn leadership program, I was able to compare farming in the eastern portion of the country to what we do back home in Nebraska,” said Cody Mallette, a junior agricultural business student at the University of Nebraska-Lincoln. “I also have a better understanding of policy development related to corn production. It was great to see corn farmers come together from several different states to work on common goals and strategize for the future.”

The nine-member leadership team consisted of:

Early in the week, the group visited a variety of farms specializing in poultry, organic grain and produce, trees and shrubs. The leadership team then spent time in Washington, D.C. and toured U.S. national monuments and visited with USDA Undersecretary Greg Ibach. As the week progressed, the group participated in Corn Congress, a multi-day policy development event organized by the National Corn Growers Association. During Corn Congress, participants had time to meet with Nebraska’s congressional leaders and national agribusinesses, such as the U.S. Grains Council, the American Farm Bureau and Growth Energy.

“Nebraska agriculture has always been a part of my life, but I never fully understood how national issues and policy development can impact local farmers,” said Courtney Nelson, a sophomore agricultural engineering student at the University of Nebraska-Lincoln. “By attending Nebraska Corn’s leadership program, I have a greater knowledge of the magnitude of how policy impacts farming in the Midwest and across the country.”