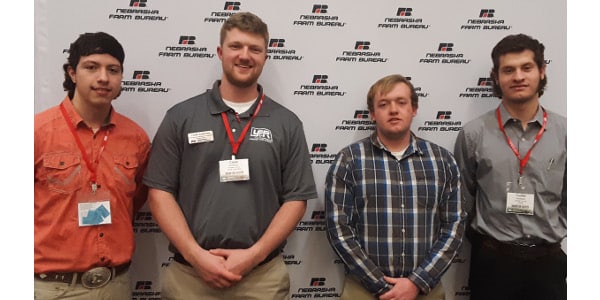 The Nebraska Farm Bureau Federation’s annual Young Farmers & Ranchers Conference was Jan. 31 and Feb. 1 in Kearney. It drew 190 producers, agricultural professionals and members from across the state.

For the past year, Clade Anderson, president of the NCTA club, had served on the YF&R steering committee which planned the conference. He was recently re-appointed for a second year.

“I was responsible for lining up the industry tours we took in Kearney the first day,” said Anderson, a sophomore agronomy major from Otis, Kansas.

“We had a great conference that was well attended and provided excellent speakers, forums and fun events for all of the participants,” he said. “We met many new friends and had informative conversations with other young people, like ourselves, who are from agricultural backgrounds or have career goals in agriculture.”

Keynote speaker V. J. Smith inspired attendees to treat others with dignity, kindness, and respect through the life story of Marty, a cashier from his hometown.

Some of the breakout session topics were soil health, grain marketing, how to deal with farm stress, sharing the story of agriculture, using drones in agriculture, business and marketing.

Freshman Gilbert Herrera said he enjoyed it all – from the conversations, meals, new friends, ag tours and informational sessions on topics such as plant-based burgers, stress in farming, and self-care or lifestyle goals for agricultural producers in proper nutrition, exercise and mental health.

A highlight was seeing the massive warehouse of Cash-Wa Distributing and learning from Tom Henning, CEO, about inventory, consumer marketing and the business model for the family business based in Kearney.

“I never really knew that much about potatoes and saw the whole farm, learned about growing and storing the crop,” Herrera said.

A motivational speech by V. J. Smith resonated with him, too, echoing things that his mother, Maria, shared with her children.

“I could relate to what he said in talking about kindness and respect,” Herrera said. “My mother always told us that when you give to others, you are the recipient too. You get back more than you give.”

Tucker Hodsden of Lyman, Nebraska, said he reconnected with young producers he’d met at the NFBF convention in December, and made new acquaintances, too.

“Since I am way out west (near the Nebraska-Wyoming border), it was interesting to meet producers from the east and learn about their operations and production,” Hodsden said.

After graduating in ag mechanics and production from NCTA in May, 2021, Hodsden plans to attend UNL for his 4-year degree in mechanized agriculture.

“The YF&R conference gave me a chance to see some of the new things that came out in agriculture and how they are changing the industry,” he added.

Future activities for the NCTA club include monthly meetings, and a policy and issues forum in Lincoln this spring when students can visit their state senators and observe the Legislature in session.