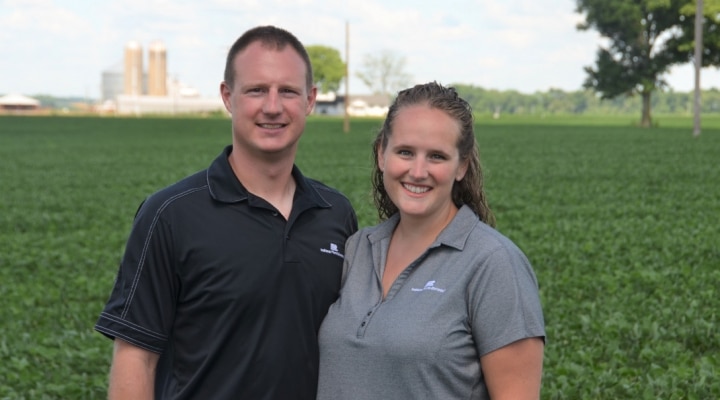 Finalists have been selected for Indiana Farm Bureau’s Young Farmer awards – the Excellence in Agriculture Award and the Achievement Award. These state awards are conducted as a part of the American Farm Bureau Federation Young Farmers and Ranchers Award competition. Pictured are John and Abby Michel, Gibson County, finalists for the Excellence in Agriculture Award. (Courtesy Photo)

INDIANAPOLIS — Finalists have been selected for Indiana Farm Bureau’s Young Farmer awards – the Excellence in Agriculture Award and the Achievement Award. These state awards are conducted as a part of the American Farm Bureau Federation Young Farmers and Ranchers Award competition.

The Excellence in Agriculture Award recognizes outstanding young Farm Bureau members who do not derive the majority of their income from an owned, production-agriculture operation, but who actively contribute and grow their involvement in Farm Bureau and agriculture. Winners must be members of Indiana Farm Bureau between the ages of 18 and 35.

Alan Duttlinger, Tippecanoe County
Alan Duttlinger grew up on a grain and swine farm where he developed a love for agriculture. After years of involvement in 4-H and FFA, Duttlinger decided to pursue a career in animal agriculture, earning several degrees in animal science and swine nutrition including his doctoral degree in swine nutrition from Purdue. His degrees helped him excel in his career, first as a research and development specialist and then as a nutrition manager for a large pork processor. Currently, Alan is a swine nutritionist at Purina Animal Nutrition. As part of the national swine team at Purina, he works with many pork producers across the country. He is an active Farm Bureau member, having competed in the American Farm Bureau Federation Discussion Meet and serving as a representative on the State Young Farmers & Ag Professionals Committee.

As partners in their family’s multigenerational farm, the Michels devote a lot of time and energy to the operation. On the farm, John assists with planting and harvest and manages the chemical and fertility programs and farm technology systems. He also works full-time as an operations manager at AgriSelect where he helps local farmers with their ag-chemical programs and provides general agronomics counsel. Abby supports all farm operations and can often be found moving equipment and delivering parts. John has a bachelor’s degree in Ag Systems Management and Abby a master’s degree in Youth Development and Ag Education. A few years ago, the Michels participated in the INFB Leaders in Action program which led to their involvement with the county Young Farmers & Ag Professionals program. They later served as District 9 representatives on the State Young Farmers & Ag Professionals Committee.

The Schroeders divide their time and energy between their on-and-off the farm jobs. They own and operate a primarily registered Angus cattle farm, but when they’re not on the farm, Isaac and Kyla also work full-time jobs in the community. Isaac works in agronomy sales for Superior Ag where he advises farmers on their planting decisions, including seed inputs and crop nutrition. Kyla works for Domtar Paper Company as an executive administrative assistant where she helps the general manager with his duties including corporate events and community engagement. The Schroeders attended Western Kentucky University where they each earned bachelor’s degrees in agriculture. They’re active Farm Bureau members, Isaac having served as a member of the county’s board of directors since 2018. They’re also active supporters of their local 4-H program and their local Soil and Water Conservation District.

The Burtons run a diversified farm operation which includes corn, soybeans, hay and beef cattle while providing several custom services for other farmers in their part of the state. Kevin has a degree in agriculture business management and crop production and is now the vice president and general manager of the farm, coordinating many of the daily operations. A large part of their business, poultry litter spreading, covers 14 counties across the northern part of the Indiana. Kim has a degree in early childhood education and now works part-time on the family farm. She also does photography in her spare time and has photographed family and senior portraits and weddings. The Burtons are active Farm Bureau members, having served as Young Farmers & Ag Professionals co-chairs for their county Farm Bureau since 2015.

Together, the Musselmans have grown their family’s traditional grain operation into a diversified farm which includes corn, soybeans and wheat but also hogs and local sweet corn. Beyond their own farm, they also operate a robust custom farming operation for farmers in their community where they create individual crop plans for their clients and run a local seed dealership. Kyle started the family’s wean-to-finish hog operation at 19 years old, which was a pivotal step in allowing them to later take over the entire family operation. They met at Purdue, where Kyle earned a bachelor’s degree in Ag Systems Management and Leah a bachelor’s degree in Ag Economics – Sales and Marketing. Several years ago, the Musselmans joined the Miami County Farm Bureau board as Young Farmers & Ag Professionals co-chairs and revitalized their local YF&AP program.

The Reeds are fourth-generation farmers who bring a diverse background in agriculture to their operation in Elkhart County.Brent grew up raising corn, soybeans and sheep and at 15 years old, he rented his first farm and purchased his first flock of sheep. Ashley grew up on a grain and earthworm farm before earning a degree in business administration. Today they raise corn, soybeans, hay and sheep, and manage all aspects of the family farm. Both Brent and Ashley work on the farm full time – handling everything from seed selection to running the combine during harvest. They grow conventional, non-GMO and organic crops. They also manage a seed and fertilizer business. As active Farm Bureau members, the Reeds have served their county as Young Farmers & Ag Professionals co-chairs since 2016.

The winners of both contests will be announced on the Indiana Farm Bureau Facebook page on Wednesday, Aug. 26.

Producers invited to get away & connect with information & each other
May 17, 2021