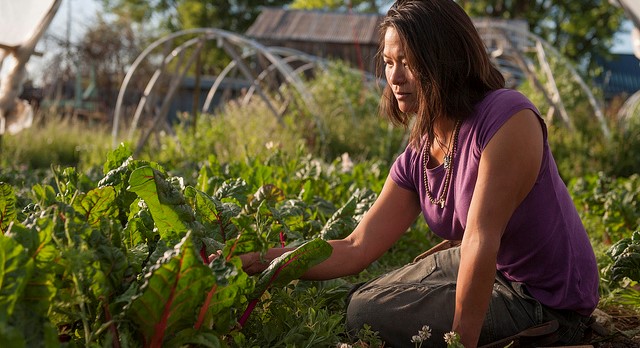 In recent years, the U.S. Department of Agriculture has made a broad spectrum of agriculture loans available, not only to established, large-scale commodity farmers, but also to help those who are starting from scratch. (Stock image via Oregon State University, Flickr/Creative Commons)

Hodapp owns 5 sun-exposed acres along the Spiral Highway north of Lewiston where he plans, beginning in March, to open a farm store. He has banked his future on a small herd of eight dairy goats, 5,500 strawberry plants, some herbs and vegetables and eight white geese who noisily and persistently announce the arrival of visitors.

“Well, it’s been a lifelong dream,” Hodapp said of his decision to quit his job as a park ranger at Hells Gate State Park and give up a steady income.

“I even cashed out my retirement,” he told the Lewiston Tribune . “Not something I would recommend people do, because it was a really good retirement. But I’ve wanted to start a small farm since I was a kid back in Ohio. And then when I lived in Wisconsin I did start a farm, but life changes just eventually led me here.”

Risky though it seems — Hodapp is also the father of two young children, ages 7 and 5, and shares custody with his ex-wife — he is part of what is seen as a national trend of mainly younger people quitting or augmenting their day jobs and branching out into small-scale farming.

“In the last month, I have heard from two or three people who are doing the same thing,” said Chanel Tewalt, a spokeswoman for the Idaho State Department of Agriculture. “People who have left long-standing, established careers and gone into farming.”

Those who make that leap, Tewalt said, face stark challenges, especially if they do not come from farming backgrounds or don’t already own the land.

“Agriculture is tough, financially, and also from a knowledge base,” Tewalt said. “It’s one of those industries, if you come from (a farming background) you have a little bit of an advantage, but without it, it’s cost-prohibitive. So I’m glad we have various loans for small and disadvantaged farmers, because otherwise it can be tough to get into farming.”

In recent years, the U.S. Department of Agriculture has made a broad spectrum of agriculture loans available, not only to established, large-scale commodity farmers, but also to help those like Hodapp who are starting from scratch.

Some of the loans target women, minority groups and people with certain health or financial disadvantages. Those loans have made it possible for people who otherwise would not be able to start a farm to cultivate their dream.

Leah Clark, head of the Idaho Preferred marketing arm of the state agriculture department, said there is a growing demand for locally grown fresh produce, and that has helped spark more interest among small farm owners.

“I do see that the use of local food in food service, and the demand in retail continues to be a very strong trend, and we need to be listening to the chefs and the retailers when they would like us to grow and try to plant accordingly,” Clark said.

The call for locally produced food has a variety of reasons.

“Our research shows (the demand) is to support local farms and the local economy — that’s the No. 1 issue,” Clark said. “Food safety is on the list, but it’s in the middle of the pack. These other issues of supporting the local economy with freshness and flavor always comes in on the top.”

Clark said there also is a desire among some larger commodity farmers to begin diversifying their farms in order to keep the next generation at home. That sometimes means taking the raw product of the farm and making it into a value-added resource, such as a mint grower in southern Idaho whose daughter is now creating mint oil and other items from the crops her family raises.

“The next generation coming home wants to take it to the next level, and (diversifying) has allowed them to bring their children back on the farm,” Clark said.

Hodapp did not make his move without careful thought. He participated in the University of Idaho Extension’s Cultivating Success program (see companion story) that helped him develop a business plan.

He’s also been tinkering on his acreage for a couple of years, preparing to make the switch to full-time.

“I would rather have the work that I do reflect the income that I make,” Hodapp said. “I did work hard at the park ranger job, but there wasn’t any avenue for advancement (because of his parenting obligations and lack of opportunity to move into a supervisor’s role).

“There was no way to make any more money than I already did, and I’ve wanted to start farming for a very long time. So the pieces have all just kind of come together to sort of speak for themselves, and it’s time to give it a shot.”

Because he has farming and marketing experience from his days in Wisconsin, Hodapp is confident he can make a go of his enterprise selling his produce on-site.

He plans to do some marketing at regional farmers markets this spring in order to get his name out, but only for a short while.

“Farmers markets are good, but it’s a lot of work to take all of your harvest, put it all together, load it up, take it to the market, sell it, then pack it all up at the end of the day – and you’re only getting one day of the week for profit. So it seems like you make a whole bunch of money at one time, but spread out over an entire week, it’s about the same as if you’re slowly selling off-site.”

He’s had friends help him plant the strawberries and with other odd jobs, but for the most part Hodapp plans to do the work himself. Part of the business plan includes advertising and outreach to let people know about the fresh produce he will offer.

“It seems like there are a lot of people my age and younger that are looking for something that gives them more a sense of adventure or value,” Hodapp said. “I hear people always talking about ‘living with intention,’ which I don’t know what that means, but it seems like a word that people my age and younger use a lot – living with intention. And this is the lifestyle that suits those people’s needs. But what people do need to be aware of, it’s not just the romantic aspect. It’s lots and lots of hard work.”

In spite of the task ahead of him, along with the uncertainty of starting a new business, Hodapp said he has had no second thoughts about giving it a try.

“It’s a risk; it’s definitely a risk. But at 38, having the resources that I do now, I decided that it was time to take that risk.”