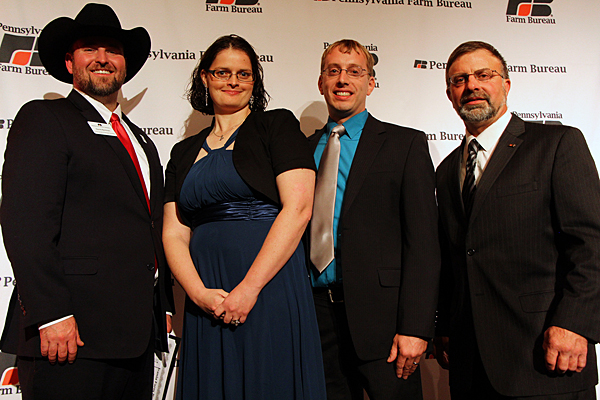 The Groves, who both grew up on family farms, were chosen based on their overall involvement and leadership in agriculture and Farm Bureau, even though they do not derive the majority of their income from an agriculture operation.

Corey currently works full-time as an environmental consultant assisting farmers with their nutrient management plans, conservation planning, CAFO permitting and other duties, while Heather works as an administrative assistant for the York County Fire School, which trains emergency responders. Meanwhile, Corey and Heather both work part-time on their parents’ farms. The couple also grows vegetables and raise chickens and steer on their two-acre farmette near Stewartstown.

“In the years ahead, we plan to continue to raise animals and expand our home farm by increasing the size of our cattle herd,” said Corey Grove. “We are also interested in advocating for agriculture, with a special emphasis on identifying ways to make it easier for farmers to comply with government regulations.”

The Groves point out that the further removed people become from their food, the less they understand about modern agriculture practices. The couple emphasizes that it is critically important for farmers to talk with people in the local community, especially if they plan to expand their farm business.

“Corey and Heather have hands-on farming experience and working knowledge of farming practices and animal care, which is beneficial in their full-time, off-the-farm jobs,” said PFB President Rick Ebert. “The Groves clearly are dedicated to agriculture and have a strong interest in identifying and promoting opportunities for farmers to prosper in the future, while continuing to meet the needs of consumers.”

The other finalist for the Excellence in Agriculture Award was Shawna Weller of Loysville, Perry County, who works full time as an Agricultural Relationship Manager for a bank. Weller grew up on her family’s 300-acre dairy farm and credits much of her leadership and personal skills to her involvement in 4-H and FFA.

As the winner, the Groves receives a variety of prizes, including an expense paid trip to PFB’s 2018 State YF&R Leadership Conference and free lodging and registration for the American Farm Bureau Federation’s Annual Meeting in Nashville in January.

Hundreds of farmers from across the state attended Pennsylvania Farm Bureau’s 67th Annual Meeting at the Hershey Lodge and Convention Center from November 13-15, to set policy for the statewide organization on issues affecting farm and rural families.