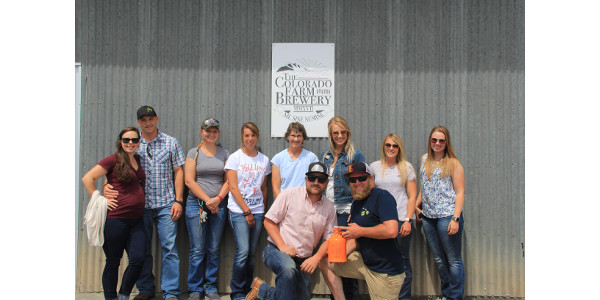 Young farmers and ranchers from around the San Luis Valley followed the journey of beer — beginning in the field and ending in the glass. (Courtesy of CFB)

CENTENNIAL, Colo. — The craft brew industry has exploded in Colorado. Everyone knows that. What not everyone knows is how that beer is made. Young farmers and ranchers from around the San Luis Valley followed the journey of beer — beginning in the field and ending in the glass.

The San Luis Valley is located in the south-central part of Colorado, a high altitude alpine valley that is notoriously unique in climate and growing conditions. Barley is a common crop in the area and provides local ingredients for two malting facilities and multiple breweries in the SLV and around the state.

The Colorado Malting Company has been supplying breweries and distilleries since 2008. Right outside their brew pub, is a field of rye barley. Rye that is waiting to be processed into malt that will make delicious beer and spirits in the coming year. Some, will even be brewed into beer for their in-house brewery that opened in April. “We’re the only place in the U.S. that malts their own grain and makes their own beer,” said Ray Coody, owner and patriarch of the family business where his two sons also work.

The Coody family originally milked cows and grew crops before converting the buildings and facilities into the perfect place for malting. Showing the ingenuity that is unique to farmers and ranchers — they built their own malting equipment.

The family owned business exemplifies what it means to be a craft malting company that is truly Colorado-made. Colorado Malting isn’t the only malting facility in town. Proximity Malt is located about 20 miles away and produces malt on a much larger scale.

They don’t just produce malt for local breweries, they produce malt on such a large scale that they are able to sell to grain producers and malt flavoring companies. The larger scale facility and highly specialized equipment allows Proximity to be highly efficient. They even received an award for the most efficient natural gas building in Colorado. There’s no better way to understand the process than to taste the final product and see where it’s made. Price Farms hosted us in their field to show us how the crops they grow help Woody Creek Distillery make their rye whiskey and potato vodka.

The group was also honored to be hosted by Three Barrel Brewing Company in Del Norte, Colorado and Square Peg Brewerks in Alamosa. They showed us their brew tanks and let us taste beer made with quality, SLV-grown ingredients.