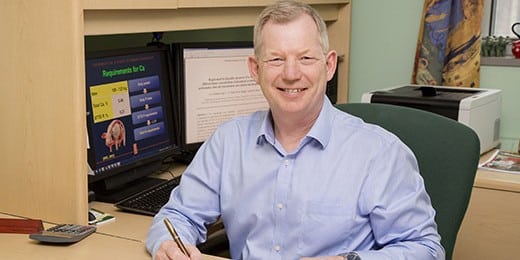 URBANA, Ill. — Starting weanling pigs off with the right diet can make all the difference for the health and productivity of the animal. A new University of Illinois study shows amino acids from a new torula yeast product are more digestible by young pigs than amino acids from fish meal.

“We cannot supply all the amino acids for weanling pigs with soybean meal. We need another source. We used fish meal for a long time, but that is getting too expensive. There are also issues with price and quality volatility, supply, and sustainability with fish meal,” says Hans H. Stein, professor in the Department of Animal Sciences at Illinois. “Our study shows we can use the torula yeast product instead of fish meal in diets for weanling pigs.”

Stein and doctoral student Vanessa Lagos determined digestibility of amino acids, energy, and phosphorus in a new type of torula yeast produced from woody biomass from the forestry industry. The yeast consumes and metabolizes sugars released from wood, then is pasteurized and dried to a high-quality protein ingredient that can be fed to animals.

In a series of experiments, the researchers quantified digestibility in diets with yeast or fish meal included as the only sources of protein. In the first experiment, weanling barrows were fed a cornstarch-based diet with one of the two protein sources, and digesta were collected and analyzed after five days. The standardized ileal digestibility of crude protein and all amino acids was greater for the torula yeast product than fish meal.

“The yeast has a lower concentration of amino acids but we saw greater digestibility. Therefore, we get the same amount of digestible amino acids from the yeast as we could get from fish meal,” Stein says.

In the second experiment, weanling pigs were fed corn-based diets supplemented with yeast or fish meal. Results indicated that digestible and metabolizable energy did not differ between the two protein sources.

A third experiment determined the digestibility of phosphorus by feeding the two sources of protein with or without phytase, an enzyme that makes phosphorus more available to the pig.

“Fish meal contains a lot of calcium and phosphorus compared to yeast. However, like the amino acids, the phosphorus in yeast was more digestible than fish meal. There is just less of it,” Stein says. “Ultimately, the torula yeast product provides same amount of digestible amino acids and metabolizable energy as fish meal, but a little bit less phosphorus. That’s the bottom line.”

He adds that the torula yeast product may have immune-boosting properties relative to fish meal, and plans to investigate that effect in an upcoming study. He also plans to study the growth performance of pigs fed a torula yeast-based diet.

The article, “Torula yeast has greater digestibility of amino acids and phosphorus, but not energy, compared with a commercial source of fish meal fed to weanling pigs,” is published in the Journal of Animal Science [DOI: 10.1093/jas/skz375]. The research was supported by Arbiom Inc. The Department of Animal Sciences is in the College of Agricultural, Consumer and Environmental Sciences at the University of Illinois.