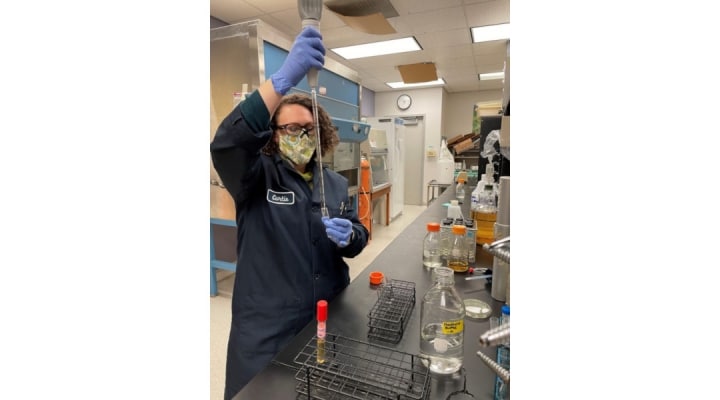 PULLMAN, Wash. — Washington State University researchers are working to develop a nutrient formula for yeast that could make fermentation easier and more predictable for cider-makers.

“Cider apples don’t have as many nutrients for yeast, unlike grapes,” said Claire Warren, a microbiologist for WSU’s School of Food Science. “I want to make a nutrient base for yeast used with cider apples so fermentation can be more predictable batch to batch and year to year.”

The role of yeast in cider-making is what distinguishes hard cider from apple juice. To make hard cider, yeast converts the sugars from cider apples into alcohol. That’s fermentation.

Commercial nutrient formulations are available through a variety of retailers to winemakers, beer brewers, and cider-makers looking to assist the process of fermentation. Nutrient formulations contain a combination of amino acids, ammonium salts, vitamins, and minerals, giving the yeast a nutritional boost to avoid fermentation problems.

WSU professor and food scientist Charles Edwards said while much is already known about the way yeast interacts with grape musts, apples are radically different.

“Apple cider production is really about blending different apple varieties together to get the type of flavor and characteristics that consumers want,” Edwards said. “What we don’t know, where we’re struggling, is there isn’t any analytical information about what’s in cider apples, from a yeast nutrition point of view. That’s the basis of our research, to figure out what’s there, and figure out how we can improve production.”

The bitter, dry flavor of cider varieties doesn’t make for delicious fruit, but it is ideal for what is also known as ‘hard cider.’

“No matter what kind of yeast you use, fermentation should go off like a rocket,” said Rick Hastings, owner of Liberty Cider in Spokane, Wash.

“We used commercial yeast when we started, but there were too many variables to decide which type would go best with which apple. We’re now using a wild yeast originating on the apples we use,” he said. His cidery produces 15,000 liters of hard cider every year.

So far, Hastings has had a lot of success with wild yeast, but he still sees a need to stabilize input conditions.

“Varying nutrient levels associated with orcharding practices, specific trees, or root stocks can make fermentation tricky,” he said. “We don’t know until fermentation begins how it’ll go, whether we’ll need to add nutrients or wish there weren’t already so much in the juice.”

Warren is currently spending her days in the lab working to understand yeast nutritional needs for cider fermentation. Ideally, cider producers would then have another tool in their toolbox to limit problems during fermentation, tailored for cider production.

“I want to understand the nutrient profile of cider apples so I can tailor the nutrient requirements based on what we find,” she said.

Research for this project is funded by the Washington State Cider Research Program, along with assistance from Montréal-based Lallemand Inc., a major supplier of fermentation products.

Results of the ongoing study are expected in the fall of 2021.

USDA seeks nominees for the American Lamb Board