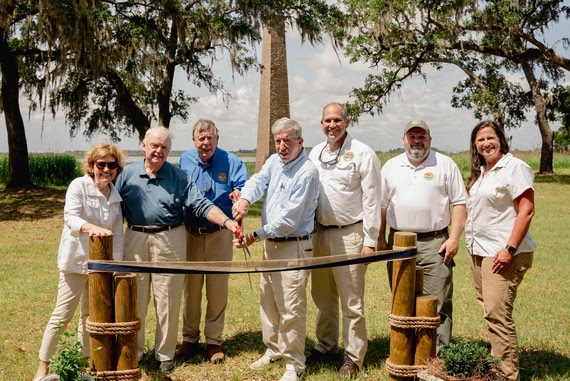 On Monday, the South Carolina Department of Natural Resources (SCDNR) announced that the Yawkey Foundation has donated 269 acres of protected wilderness in Georgetown County, consisting of upland pine and wetlands that serve as habitats for numerous bird species, to the people and communities of South Carolina. (SCDNR photo)

COLUMBIA, S.C. — On Monday, the South Carolina Department of Natural Resources (SCDNR) announced that the Yawkey Foundation has donated 269 acres of protected wilderness in Georgetown County, consisting of upland pine and wetlands that serve as habitats for numerous bird species, to the people and communities of South Carolina.

The parcel will be added to Georgetown County’s existing Tom Yawkey Wildlife Center, a 24,000-acre protected natural preserve that was originally donated to SCDNR by Tom Yawkey in 1977, and funded in perpetuity by the Dedham, Massachusetts-based Yawkey Foundation. In recognizing the 45th anniversary, the donation also highlights the more than $35 million provided by the Yawkey Foundation to directly fund the operations and upkeep of the Wildlife Center, which conducts educational guided field trips for thousands of visitors each year free of charge and plays a critical role hosting landmark biology and wildlife research studies on alligators, leatherback turtles and other species.

“With the benefit of 45 years of hindsight, I can confidently say that Tom Yawkey’s gift to South Carolina is indeed priceless,” said Department of Natural Resources Director Robert Boyles. “Mr. Yawkey’s commitment to this region that he called home, and his enduring legacy of preserving this natural resource for future generations, was nothing short of inspired and reflected his deep dedication to the people, communities, and nature of this very special part of Georgetown County.”

The tract also contains the Belle Isle Rice Mill Chimney, a 33-foot-9-inch high brick structure that is on the National Register of Historic Places (1983) due to its exceptional condition and original corbeling. It also provides a uniquely intact example of the region’s historic rice fields.

The famed American artist Andrew Wyeth was a visitor to Cat Island, wherein 1937, he painted one of his well-known watercolors entitled “Under the Live Oaks,” currently part of the Greenville County Museum of Art collection.

“In 1925, when Tom Yawkey inherited this property so beloved to him since his childhood, and which his uncle had purchased in 1914, Tom immediately began investing in its conservation and preservation,” said Maureen H. Bleday, CEO of the Yawkey Foundation. “As a result, this parcel, and, in fact, the entire 24,000 acres that comprise the Tom Yawkey Wildlife Center, is virtually untouched by development. The trustees feel confident that Tom would be exceptionally pleased that this land that he purchased almost 100 years ago continues to provide visitors and researchers a unique opportunity to experience the natural beauty of this region, as well as the many animal species that call it home.”

The Tom Yawkey Wildlife Center was donated to the State of South Carolina in 1976 under the will of the late Thomas A. Yawkey as a wildlife preserve and research area. It is considered one of the most exceptional gifts to wildlife conservation in North America. In 1925, Tom Yawkey inherited a property along the Georgetown County coast, which his uncle had originally purchased in 1914. His love for the area formed the foundation of a a deep lifetime connection to the Georgetown area for Yawkey and his wife, Jean. The Tom Yawkey Wildlife Center includes North Island, South Island, Sand Island and most of Cat Island, four coastal islands located at the mouth of Winyah Bay in Georgetown County. Composed of about 31 square miles of marsh, managed wetlands, upland pine forests, beaches, and maritime forests, the property is dedicated as a wildlife preserve, research area, and waterfowl refuge.

In 1977, the Tom Yawkey Wildlife Center was dedicated as a Heritage Preserve under the Heritage Trust Program, and 2022 marks the 45th anniversary of the very special partnership between SCDNR and the Yawkey Foundation. Dedicated to perpetuating responsible, sustainable land donations in the U.S., Tom Yawkey bequeathed his property to be administered by the state and established a trust for funding the perpetual operation of the Tom Yawkey Wildlife Center by way of the Yawkey Foundation.

The Yawkey Foundation is dedicated to perpetuating the philanthropic legacy of Tom Yawkey and Jean Yawkey, whose eight decades of quiet generosity supported individuals and families in the communities that were closest to their hearts, including Boston, Massachusetts and Georgetown County, South Carolina. Having awarded more than $530 million to date in charitable grants to organizations focused on health care, education, human services, youth and amateur athletics, arts and culture, and conservation and wildlife, the Yawkey Foundation is committed to preserving and sustaining the charitable values of the Yawkeys by investing in nonprofits that provide resources, opportunity, and dignity to the vulnerable and underserved. For more information, please visit http://www.yawkeyfoundation.org.