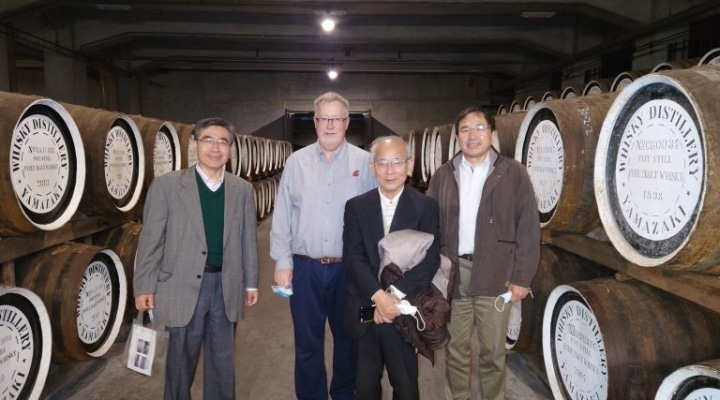 Collins (second from left) in the barrel room at the Suntory Yamazaki Distillery near Kyoto with his host, Dr. Oda (right). Also pictured are Dr. Tanahashi (left) and a colleague of Dr. Oda (second from right). (Courtesy Photo)

YAMANASHI, Japan — A year ago, when Washington State University’s Tom Collins was invited by the American Society for Enology and Viticulture (ASEV) to present his research in Japan, he didn’t know if it would be possible due to the country’s COVID-19 travel restrictions.

“Making the trip was a great opportunity,” said Collins, whose wife and teenage son joined him for the weeklong stay. “This was my first visit to Japan. It was an amazing time, and we had wonderful hosts.”

The University of Yamanashi, located in a region that houses a large part of the Japanese grape and wine industry, hosted the conference.

During the meeting, Collins presented an overview of his grape smoke exposure research and described risk assessment and mitigation efforts. Though Japan doesn’t experience as many wildfires in grape growing areas as the U.S., the topic of grape smoke exposure is still relevant.

“A potential cause for concern could be the practice of burning the stubble left in the rice fields after harvest,” said Collins. “That sometimes coincides with the grape harvest.”

Normally a two-day, in-person event, the 2022 meeting included both a physical and a virtual component, with a portion of the research presentations conducted online. The in-person segment included Collins’ talk as well as a dozen or so presentations from other scientists.

Founded in 1950 and comprising some 2,400 members, ASEV is the main scientific society for the U.S. grape and wine industry. Collins served as ASEV president from mid-2021 to mid-2022, during which he led the board of directors in bi-monthly meetings, among other responsibilities. Every three years or so, the Japan ASEV chapter invites the society’s president to visit their country.

Though no longer president, Collins, who has also previously attended ASEV Eastern Section meetings on behalf of the society, will remain an ASEV member. Some of his responsibilities as past president, including participation in various committees, will continue beyond this year.

The Japan ASEV chapter was created in 1984. Over the years, Japanese students and researchers have partnered with individuals at the University of California, Davis, where ASEV is headquartered, to work on viticulture and enology projects. During those visits, researchers saw how Japan’s wine industry could benefit from establishing a chapter that would strengthen the wine science research connection to UC Davis and the U.S. academic community.

“The Japanese industry is relatively small, but it’s growing,” said Collins. “On the surface, it may seem unusual to have a Japan ASEV chapter. But based on the relationship between academics and the people working in grapes and wine in Japan, it makes perfect sense.”

In his free time during the Japan trip, Collins visited shrines in Kyoto and Kofu, the 1500s-era Matsumoto Castle, and other cultural sites. He was also able to take tours of a winery, several distilleries, and a sake brewery, where he witnessed the process of making sake for the first time. Because the visit took place just after COVID-19 restrictions were eased, some of the cultural sites weren’t crowded, Collins said.

Collins is grateful for the chance to share his grape smoke exposure research internationally while experiencing Japan’s culture.

“It was a terrific opportunity and a once-in-a-lifetime trip,” he said. 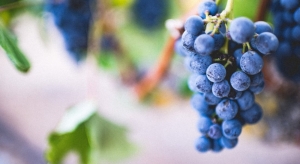 PULLMAN, Wash. — A research team including Washington State University scientists has discovered a class of compounds that contribute to smoke impact in wine and grapes.“It’s a great step forward in understanding how smoke exposure results in smoke-exposed perception—there’s been a missing link until now,” said Tom Collins, an assistant professor of grape and wine […] 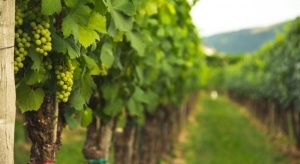 PULLMAN, Wash. — WSU assistant professor Dr. Tom Collins has been confirmed as president of the American Society for Enology and Viticulture (ASEV) for 2021 – 2022. ASEV is a professional society dedicated to the interests of viticulturists, enologists, and scientists who work in grape growing and wine production. Formed in 1950, ASEV’s membership includes […]

Should you sign up for 2023 Dairy Margin Coverage? Deadline extended

Changes for the New Year!