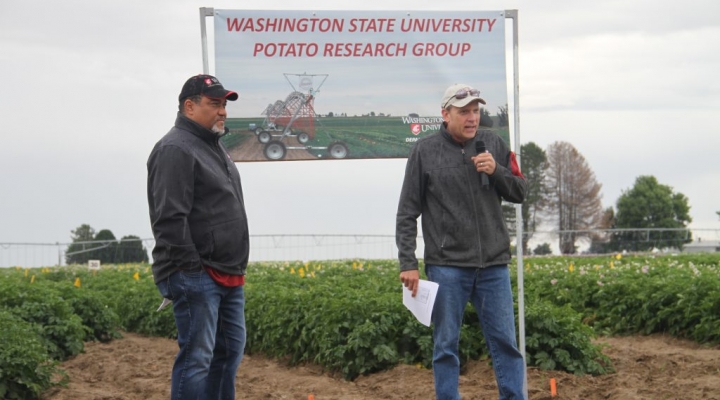 PULLMAN, Wash. — For more than 15 years, Washington State University scientist Mark Pavek has helped potato growers develop more nutritious, hardy, and marketable varieties of the humble, versatile spud. If you’ve eaten a McDonald’s French fry or enjoyed a tater tot, chances are good that you have tasted some of the results of his labor.

This year, Pavek is putting his expertise to work on a national stage, championing research and student support during a one-year term as president of the Potato Association of America.

Founded in 1913, the association is the research and extension arm of the U.S. potato industry, and welcomes potato-interested members from 33 other countries.

“We work to keep the industry globally competitive, while supplying people with an inexpensive, sustainable food supply,” Pavek said. “We are the ones bringing forth improved, efficient varieties and production methods.”

A former commercial potato producer and farm manager, he has been deeply involved with the Washington-Oregon Potato Conference and the industry-created Potato Variety Management Institute’s Tri-State Breeding Program for more than a decade.

A WSU faculty member since 2004, Pavek works with growers, processors, and fellow scientists to develop upgraded, stress-tolerant varieties with more nutrition and protein. He leads trials at WSU’s Othello research farm to better defend against diseases and pests, such as potato virus Y, black dot, and lygus bug.

Over several decades, universities have been reducing the number of potato researchers through attrition.

“This position is a true honor—my father was association president in 1987-88,” he said. “I’m humbled to follow in the footsteps of many globally respected potato experts.

“The Washington and U.S. potato industries have been great to work with during my tenure at WSU, and I thank my PAA peers who gave me a vote of confidence,” Pavek added. “I obtained this position through a team effort of many people, past and present, especially my parents, the late Joseph and Sylvia Pavek, my wife Pamela, and the WSU team.”

“The thing I like most about Mark is his willingness to react to industry needs,” Voigt said. “He takes on a wide variety of projects that really help our farmers become more efficient and more sustainable. He’s our go-to person for anything regarding potato research.”

“Mark’s leadership work is evident in everything he does,” said Andrew Jensen, Northwest Potato Research Consortium Manager, a collaborator with Pavek in research and a peer in PAA for more than a decade. “He is turned to for information and guidance by a wide swath of stakeholders. One of his driving philosophies is to educate the next generation of potato professionals.”

In July, Pavek will transition to past-president and assume new responsibilities, including chairing the Honorary Life Members committee, which honors those who play instrumental roles in industry.

Learn more about the Potato Association of America at its website: https://potatoassociation.org/.