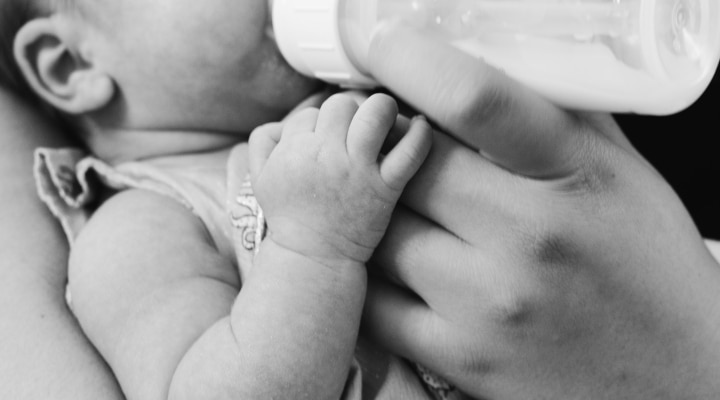 In short supply for much of 2022, infant formula is specially made to provide nutrition for younger children. (Kelly Sikkema/Unsplash)

PULLMAN, Wash. — The nationwide infant formula shortage should start to ease up this summer, but until then, families may still have a difficult time finding products for their children.

For infants who can’t breastfeed, and for children with allergies or medical conditions, “formula is extremely critical,” Smith said.

Made from cow’s milk that has been formulated to be nutritious for younger children, formula “is complex and covers all the amino acids, vitamins, and minerals that babies need,” Smith said. “You can’t just make something at home that will be nutritionally adequate.”

While Smith is not a nutritionist, she keeps up on issues surrounding food safety issues, and writes a monthly newspaper column that frequently delves into recalls, including a February 2022 recall that exacerbated a formula bottleneck cause by supply-chain issues.

The recall came after the U.S. Centers for Disease Control and Prevention received reports of infection in several young children who had eaten formula, become sick, and were hospitalized. The U.S. Food and Drug Administration received nine reports of infant deaths. Most of the cases involved the bacterium Cronobacter sakazakii; one case involved salmonella.

Bacterial samples from patients were not exact matches, but were closely related to a Cronobacter sample collected in an area within the manufacturing plant where there is no product contact. No salmonella was found at the plant, and all unopened containers of formula from patients tested negative.

Cronobacter is commonly found in our environment, Smith said, and can contaminate dried foods. Infections are particularly dangerous for infants because they don’t have fully-developed immune systems.

National efforts have been made to increase formula supplies, but the shortage is not expected to end until late July. At the beginning of June, stores in ten states, including Washington state, had out-of-stock rates at 90 percent or higher. In late May, nationwide out-of-stock rates hit 74 percent, amid warnings of hoarding and panic-buying.

Production restarted at the closed plants in June, and the manufacturer and the federal government are flying formula shipments into the U.S. over the summer.

The situation is improving, but “it will take months before that product hits the shelves,” Smith said. “It’s terrifying. Everyone needs to feed their baby, but hoarding isn’t the answer.”

Hoarding is a particular concern for premature babies, as well as infants and older children with medical conditions or allergies, who need specialized formulas.

“Some children can’t switch because of their special needs,” Smith said. “When there’s a run on formula, there might only be a couple of types that these children could eat, while others could consume a wider variety.”

Around age 1, children can eat a wider range of foods and drink cow’s milk. But Smith cautions anyone considering taking their young children off formula before they’re ready for more grown-up foods.

“I get questions, ‘Can you use powdered milk, cow’s milk, goat’s milk?’ In every case, it comes down to: What does your pediatrician say?” Smith said.

For children who aren’t old enough and ready, solid food and milk “may not be nutritionally adequate and could negatively affect their growth and development,” she said.

Smith advises parents to contact their child’s doctor for formula recommendations if their regular formula is unavailable. Don’t buy through unknown online sources, as there is a risk of receiving counterfeit products.

Infant formula is not sterile, so proper handling is important to prevent bacterial growth. Always wash your hands with soap and warm water for 20 seconds before handling formula.

Follow the label instructions for mixing, because too-diluted formula won’t have enough nutrition for babies. Formula needs to be used within two hours or refrigerated after being prepared.

Resources about formula safety can be found online from the FDA and the CDC.

All wheat stocks stored in Northwest Region down 27 percent from June 1, 2021