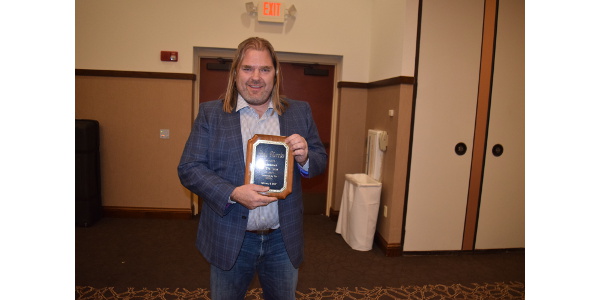 Andy Diercks of Coloma Farms, Coloma, was named the WPVGA Volunteer of the Year. (Courtesy of WPVGA)

Rod Gumz of Gumz Muck Farms LLC, Endeavor, was named WPVGA Young Grower of the Year. Gumz farms with his brother, Richard, raising over 6,000 acres of onions, red potatoes, carrots, mint, field corn and soybeans. In 2016, Rod was elected to serve on the WPVGA Board of Directors. He also serves on the WPVGA Research and Promotions committees. He is the President of the Wisconsin Muck Farmers Association and the Wisconsin Carrot Growers Association Cooperative. He serves on the Finance Council at St. Mary Church in Portage. In the past, he has been a Trustee at St. Mary Church, a Director on the Divine Savior Healthcare Board; a Director of the Greater Portage Youth Education Foundation; and a member of the WPVGA SpudPro Committee. Rod enjoys playing and coaching basketball; traveling; and activities with his family, which includes his wife, Michelle, and children, Brandon, Jason and Alexandra.

The WPVGA Researcher of the Year Award went to University of Wisconsin Horticulturist Dr. Jeff Endelman. An Assistant Professor in the UW Dept. of Horticulture, Dr. Endelman has an emphasis on potato breeding and genetics. He brings a unique set of skills and experiences to his position, including two sets of advanced degrees. First, he earned degrees in physics and bioengineering. Then, after participating in a Community Supported Agriculture program, he fell in love with farming and completed two year-long apprenticeships on small farms in California. This inspired him to go back to earn a Master’s Degree in Plant Science from Utah State University and a Ph.D. in Crop Science from Washington State University.

At the University of Wisconsin, a major focus of Jeff’s research and extension program is to produce improved potato varieties. In recent years, Jeff’s research has helped Wisconsin release several outstanding varieties including Red Endeavor, Oneida Gold and Hodag. Jeff has also been instrumental in making improvements to the Rhinelander Agricultural Research Station as well as the SpudPro commercialization program.

In addition to serving as Associate Division President, Wayne serves as the liaison to the WPVGA Board of Directors, serves on the Promotions Committee, the Vegetable Committee, the Water Task Force as well as the Spud Bowl Committee. His monthly column, “Eyes on Associates,” in the Badger Common’Tater magazine is entertaining and informative. Wayne also serves on the WPVGA Grower Education Committee and was instrumental in initiating the new Associate Division vendor presentation session.

He is married to his sweetheart, Judy, and between the two of them they have four adult children: Megan Solinsky, Chris Solinsky, Glenn Woller and Katie Woller. Wayne also serves on the Portage County Ag Tour Committee and is an excellent advocate for Wisconsin’s potato and vegetable industry.

The Agri-Communicator Award for excellence in communication and dedicated service in presenting a positive message about the agricultural industry was presented to Louis Wysocki. To list all of this WPVGA Hall of Famer’s accomplishments would take several hours. Suffice it to say, that this year’s Agri-Communicator Award winner is passionate about the potato industry, and that passion shows in everything he does. He is fearless and will never hesitate to stand up for agriculture, even when he is completely outnumbered and knows that he will face harsh criticism from many who know far less than he does. Louis dedicated countless hours in 2016 working on issues related to high-capacity wells legislation and compiling reams of information to support the agriculture cause. He is as hard working as the day is long, and put forth tremendous effort to communicate agriculture’s position on water issues to legislators, the public and fellow industry members.

Though unable to attend the Banquet, 2016 WPVGA Board President Mark Finnessy of Okray Family Farms, Plover, later presented the President’s Award to his lovely wife, Shannon Finnessy, for all her love and support. The plaque Mark presented to Shannon reads, in part, “I am extremely grateful and thankful for 20 years of your loving kindness, friendship and support. You are the best choice I ever made in my life.”

A special Industry Appreciation Award was presented post-Banquet to Ed Burns of James Burns & Sons Farms Inc., Almond. Ed did not want to be recognized because he is extremely humble, but it’s important to let the industry know how hard he works on behalf of agriculture. He was particularly active in the WPVGA Water Task Force this past year, and was completely transparent in his application for a high-capacity well near the Buena Vista creek. He worked closely with GZA GeoEnvironmental and the Wisconsin DNR, sharing a great deal of information about his land and his well application, which was ultimately approved. The industry owes a debt of gratitude to this year’s Industry Appreciation Award winner, Ed Burns.