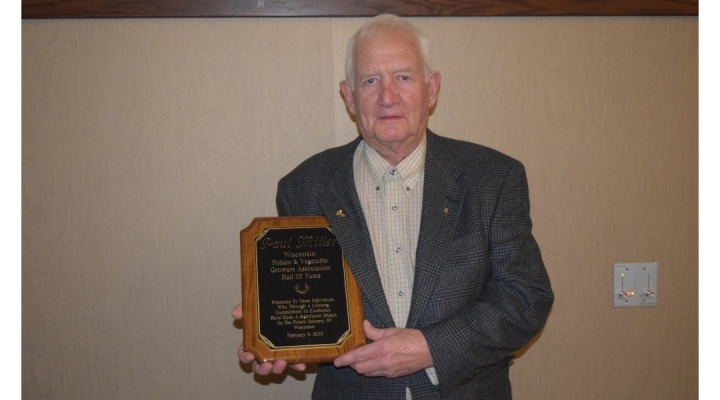 The Wisconsin Potato & Vegetable Growers Association (WPVGA) Hall of Fame honors lifetime achievement in the development of the state’s potato industry.  It is the intention of the WPVGA to continue to honor individuals who have made significant contributions to the potato industry in Wisconsin by making annual Hall of Fame inductions.

In the 1960’s and ’70s, Hancock, Wis., and the surrounding farmland was the largest bean production area for Green Giant. Many high school and college students worked for Green Giant during the summers in the production plant, shop and as novice mechanics. Paul Miller was no different.

In fact, when Paul graduated from the University of Wisconsin-Platteville, in 1965, he went back to work for Green Giant in his hometown of Beaver Dam. Paul had grown up on his own family’s farm, started by his great-great-grandparents in the 1850’s, in Beaver Dam. There, he vividly remembers plowing a field at the age of 8.

Fresh out of college, Paul moved to Fort Smith, Ark., working for Green Giant as a field man in the production areas there and in the great state of Oklahoma.

“Then I moved to Hancock,” he says, “and worked at what was called Foster Farm at the time. That’s a mile straight west of where I am now.”

Where Paul is now is Paul Miller Farms, Inc., of Hancock, and some 70 years after plowing those fields in Beaver Dam at the tender age of 8, he’s still farming. As president of the farming operation, Paul works with his son, Todd, daughter, Michelle, and grandsons, Jordan and Ian, raising 2,800 acres of vegetables, including potatoes, sweet corn, snap beans and peas, and growing 525 acres of carrots for Bird’s Eye Foods and Del Monte.

Paul’s decision, in 1967, to leave Green Giant and become the farm manager for Badger Growers, a 1,000-acre green bean and sweet corn operation located in Hancock, was a turning point. In addition to raising snap beans and sweet corn, Paul grew potatoes for American Potato (which later became Basic American Foods). In 1990, he and his two children bought all the assets of Badger Growers and formed Paul Miller Farms, Inc., an 1,100-acre irrigated potato and vegetable operation.

The farm has continued to grow over the years. Today, including rented land, the Millers farm 2,800 acres of potatoes and vegetables in Waushara County, all under irrigation. In addition to processing vegetable production, Gramma Miller’s Farm Market is open from May 1 through Oct. 31, selling fresh produce in season, flowers, canned goods, meats, honey, maple syrup, and locally grown and produced wines. A 3-acre field is dedicated to specialty crops for the farm market, such as tomatoes, squash, peppers, cucumbers, pumpkins, Brussels sprouts, eggplant, melons, gourds and Indian corn.

Paul is the long-time chairman of the township of Hancock, a past-president of the Hancock Lion’s Club and the chairman of the Hancock Cemetery Association. For 54 years, he was a WIAA boys and girls basketball referee, and is a proud supporter of Ice Hawks hockey, having had a grandson on the team. Paul is a member and supporter of St. Paul’s Catholic Church, in Plainfield, and a major contributor to the Waushara County Food Bank for many years.

Paul was named the Waushara County Citizen of the Year in 2010. He was honored with the Beaver Dam High School Wall of Fame in 2007 and received an Honorary State FFA Degree in 2003.

“My kids and their kids have worked together since they were very small to help build this operation into the successful organization that it is today,” Paul says. “While sometimes challenging, there is nothing more rewarding and bonding for a family than knowing that everyone’s efforts have contributed significantly.”

“There have been times when being a potato and vegetable grower has been challenging,” Paul admits. “I had neighbors in the area when we started growing for American Potato, and nine of us went in together, forming sort of a coop. It was like old-time farming when they thrashed grain. When it was time for potato harvest, five of us had trucks and there were two potato harvesters, and we’d go from farm to farm, neighbor to neighbor, harvesting potatoes. That’s where it started.”

“It’s a major honor, obviously, to be named a WPVGA Hall of Fame member after all these years,” Paul concludes.