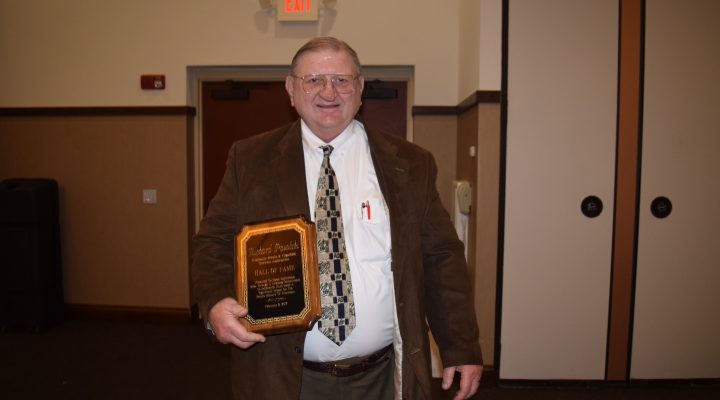 Richard “Dick” Pavelski is a 4th-generation farmer whose roots date back to 1873 when his great-grandfather, August Pavelski, emigrated from Poland. (Courtesy of Wisconsin Potato & Vegetable Growers Association)

STEVENS POINT, Wis. — The Wisconsin Potato & Vegetable Growers Association (WPVGA) Hall of Fame honors lifetime achievement in the development of the state’s potato industry. It is the intention of the WPVGA to continue to honor individuals who have made significant contributions to the potato industry in Wisconsin by making annual Hall of Fame inductions.

Richard “Dick” Pavelski is a 4th-generation farmer whose roots date back to 1873 when his great-grandfather, August Pavelski, emigrated from Poland. The farm he worked on when he was younger had some dairy cows as well as potatoes and vegetables. Today, Dick serves as the CEO/Owner of Heartland Farms, Inc., one of the largest growers of chipping potatoes in the nation with over 18,000 acres of potatoes and vegetables.

Dick was born August 21, 1949, in Stevens Point, Wisconsin, the son of Albert and Irene Pavelski. He grew up in Amherst Junction and graduated from Pacelli High School in Stevens Point in 1967.

In 1979 Dick recognized there was a need for a dedicated full-service independent fertilizer and chemical supplier/applicator in Central Wisconsin who could meet the current and future needs of the agricultural industry, so he decided to build Pavelski Enterprises. Many of the technologies that are being used today were developed in that business. Dick worked with the Stennis Space Center and explored utilizing satellite imagery for precision applications. He helped pioneer many of the soil sampling techniques and variable rate application equipment that built a foundation for what you see today. Pavelski Enterprises’ sales grew to over $21 million annually. In 1990, Pavelski Enterprises was sold to Growmark and Richard went back and joined his brother John on the Family Farm to become more involved in the growing of crops once again.

After the sale, Dick partnered up with David Knights and took the original 550-acre farming operation, Pavelski Farms, to the next level … what is today Heartland Farms. Through hard work, dedication and extreme risk, the original 550-acre farm has grown to over 18,000 acres with over $50 million in sales. Dick’s continued commitment to agricultural sustainability and innovation is second to none.

During the growth of Heartland Farms, Dick consulted on production and storage projects in Scotland, the United Kingdom, Poland and Russia. He also partnered with two other growers to build a 7,000-acre potato farm in Mexico from 1997 to 2003. Today, Heartland Farms is one of the largest Frito Lay growers in the nation.

Heartland Farms was named the winner of the 2012 National Potato Council Environmental Stewardship Award. “We’re very grateful for this honor,” Pavelski said. “We have a long tradition of farming in our family and our farm has a strong commitment to sustainability. Our motto is ‘farming for the future,’ and we are committed to environmental stewardship because we want our farm to be around for future generations so we can continue to provide food for America and the world.”

According to Pavelski, the quality of the potatoes goes hand-in-hand with the quality of the environment and the people working at the farm. The farm uses integrated pest management, or IPM, monitoring its fields for the presence of pests and establishing thresholds for treatment. Then it dials in on problem areas and avoids unnecessary spraying elsewhere. Crop rotation and resistance management are also keys to environmental stewardship. Habitat restoration for deer and wild turkey is part of the farm’s plan, while lupine is being planted in field corners for the endangered Karner Blue butterfly. Bald eagles, waterfowl and Sandhill cranes are frequent visitors to the farm.

“Sustainability is basically a three-legged stool,” Pavelski said. “We need to conserve and protect the resources we use to grow the crop; we need to make sure that we are a valuable part of the community so we get community support and ensure that our employees are taken care of from a personnel standpoint; and we also need to make some money. Financial stability is a key part of sustainability.”

A past President of the WPVGA, Pavelski has served the potato and vegetable industry on state and national levels in many capacities. He has served on the United States Potato Board and the National Potato Council and was also a director on the National Fertilizer Solutions Association. He is a past President of the Wisconsin Fertilizer and Chemical Association as well as the Wisconsin Agri-Business Council. Locally, he is a past President of the Village of Amherst Junction, and was Chairman of the Amherst Fire Commission. He was a director on the Portage County Business Council and a member of the Portage County EMS Oversight Board. He was a Trustee of the Stevens Point Catholic Schools Foundation as well as the Wisconsin Agri-Business Foundation.

Dick is a pillar of the community donating time and financial backing for many projects. Invested and involved in 36 closely held companies, Dick has recently been referred to as a “one man economic development committee.” Over the last 25 years these companies have created over 2,000 new jobs, nearly all in the Central Wisconsin area. Dick has a philosophy of investing in and mentoring dedicated and talented people with new ideas to build companies and create jobs, as opposed to welfare or unemployment.

Dick married his wife, Barb, in 1973. They have three children, Michelle, Andria and Jeremie, and four grandchildren, Samantha, Alexander, Elliot and Eleanor, with another on the way. He resides in Arkdale, Wisconsin and Naples, Florida. His hobbies include golf, boating and ocean cruising.

Donald George Hamerski of Plover, Wisconsin, was born in Polonia on January 6, 1939. The son of the late Joseph Dennis Hamerski and Johanna Francis (Kaminski) Hamerski, he attended school in Stevens Point and was a 1957 graduate of P.J. Jacobs High School.

Donald served in the United States Army National Guard and was called up for active duty in 1958 and 1961. He was released from active duty and returned to Wisconsin to serve out his remaining service obligation.

Don Hamerski’s grandfather, Paul, came to Plover in 1889 and starting farming. According to Don, his grandfather raised “a little bit of everything, cows, potatoes, corn, you name it.” Don’s father, Joe, took over the farm in 1940 and Don formed a partnership with his father in 1961. Don took over the farm in 1964, and continued to farm with his son, Jon, and his nephew, Dale O’Brien. Today, the farm raises over 2,300 acres of potatoes, sweet corn, snap beans, sweet peas and field corn.

Although he attended a one-room school just down the road from the farm as a youngster, Don was not an old-fashioned farmer. He readily embraced change, and was constantly looking to improve his farming operation with the latest, state-of-the-art technology and equipment.

As the proud owner of Hamerski Farms, Inc., Don was a long-time member of the Wisconsin Potato & Vegetable Growers Association. He was extremely honored to receive the Century Farm Award from The Rural Life Committee of the Diocese of La Crosse in September, 2013, for being in business for 100 years. He also received the Outstanding Contribution to Agriculture Award from the Portage County Business Council in 1987.

Donald was a member of St. Bronislava Parish, serving as a Eucharistic Minister and committee member to build the new church.

He served as the Portage County Drainage Commissioner for 27 years, served on the Portage County Planning and Zoning Committee, was a board member for Mount Morris Insurance Company, was a member of the Elks Lodge and a previous Lions Club member.

Don passed away on August 9, 2016, surrounded by family. He was buried with full military honors. He is survived by his wife, Mary (Piorkowski) Hamerski, his children, Jon (Dawn) Hamerski, and Lori (Daniel) Hoerter, and his grandchildren, Trent and Taylor Hamerski, and Ashley, Katie, Gabriel and Elijah Hoerter. He’s also survived by his sister, Gerry (Larry) Stuczynski.

Donnie was a very loving family man and beloved friend. He was known to many as a very generous contributor to countless charities in Wisconsin and was regular donor to the annual Spud Bowl at UW-Stevens Point. He enjoyed bowling, was a die-hard Green Bay Packer fan and a great storyteller. He also enjoyed NASCAR and farm equipment.

Don never missed an opportunity to put a smile on someone’s face. His most treasured accomplishment was the farm. It not only allowed him to work with and provide for his family, but truly gave him peace and joy.