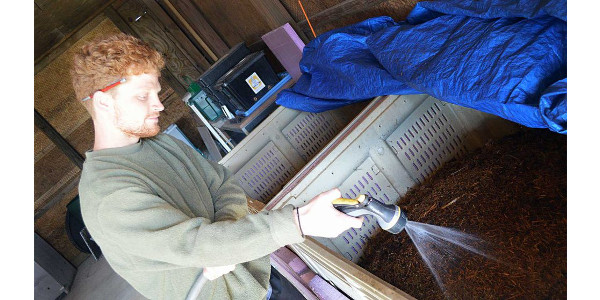 RALEIGH — You may not be that interested in earthworms but five minutes with Rhonda Sherman can change that.

She may start by telling you that there are more than 9,000 species of worms. Then, that worms don’t have eyes. They don’t have noses. They breathe through their skin. And, oh, by the way, some worms can reach up to 22 feet long.

At that point, she has your attention.

Sherman is a long-time solid waste specialist with NC State Extension and among the world’s foremost experts on vermicomposting. It’s a fancy name for the process by which some worms convert food waste and other garbage into compost, a nutrient rich soil amendment that sells for up to $30 per yard.

With clear economic and waste-reducing benefits, the popularity of vermicomposting has grown and Sherman’s expertise is in high demand. She gives up to 40 presentations a year and has fielded vermicomposting questions from people in more than half the world’s countries. But, she’s the first to tell you that her advice, articles and presentations are no substitute for seeing vermicomposting in action.

“It’s one thing to describe it on paper or show it on the screen. People want to see the worms and see vermicomposting at work,” Sherman says.

That’s why she launched the NC State Compost Learning Lab, a two-acre facility located on the university’s 1,500-acre field lab off Lake Wheeler Road in Raleigh. At this education, research and demonstration facility, 26 types of composting and vermicomposting bins are showcased, including small-scale options for the average homeowner and large-scale equipment for commercial composting businesses.

The lab also hosts composting workshops and portions of Sherman’s annual worm conference, which has drawn participants from across the United States and 25 countries. But the guests she’s most excited about recently are NC State students.

With a campus Sustainability Fund grant in 2015, Sherman hired Garnett Bullock, a sustainable materials and technology major, as the lab’s first student intern. Bullock maintains the facility, feeds the worms and connects other students with the lab through projects and events.

“I love working with the worms and showing others how cool this is,” Bullock says.

The NC State Stewards sustainability leadership program and NC State’s Engineers Without Borders chapter are just two of the student groups who have volunteered at the lab. Bullock has also hosted composting events on campus. One student attended a workshop, learned about the lab and then volunteered to feed the lab’s worms for the entire summer. The lab also assisted with a student’s sustainability pilot project to compost cotton waste from College of Textiles.

“To have this connection with students and the university is vital,” Sherman says. “There is such interest in vermicomposting, and we want to do so much more out here.”