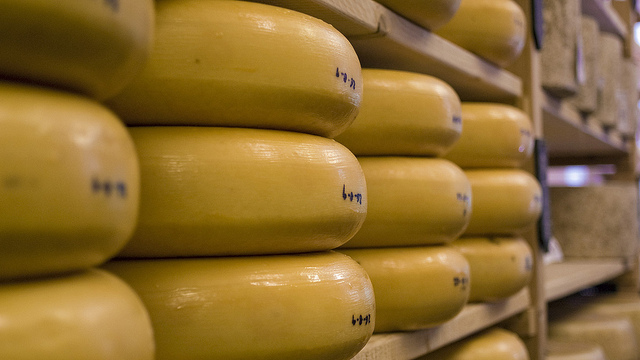 The tomb of Ptahmes, mayor of Memphis in Egypt during the 13th century BC, is thought to be the site of the most ancient solid cheese ever found, according to a study published in ACS' journal Analytical Chemistry. (Stock image via Tavallai, Flick/Creative Commons)

CAIRO — Aging usually improves the flavor of cheese, but that’s not why some very old cheese discovered in an Egyptian tomb is drawing attention. Instead, it’s thought to be the most ancient solid cheese ever found, according to a study published in ACS’ journal Analytical Chemistry.

The tomb of Ptahmes, mayor of Memphis in Egypt during the 13th century BC, was initially unearthed in 1885. After being lost under drifting sands, it was rediscovered in 2010, and archeologists found broken jars at the site a few years later. One jar contained a solidified whitish mass, as well as canvas fabric that might have covered the jar or been used to preserve its contents. Enrico Greco and colleagues wanted to analyze the whitish substance to determine its identity.

After dissolving the sample, the researchers purified its protein constituents and analyzed them with liquid chromatography and mass spectrometry. The peptides detected by these techniques show the sample was a dairy product made from cow milk and sheep or goat milk. The characteristics of the canvas fabric, which indicate it was suitable for containing a solid rather than a liquid, and the absence of other specific markers, support the conclusion that the dairy product was a solid cheese. Other peptides in the food sample suggest it was contaminated with Brucella melitensis, a bacterium that causes brucellosis. This potentially deadly disease spreads from animals to people, typically from eating unpasteurized dairy products. If the team’s preliminary analysis is confirmed, the sample would represent the earliest reported biomolecular evidence of the disease.