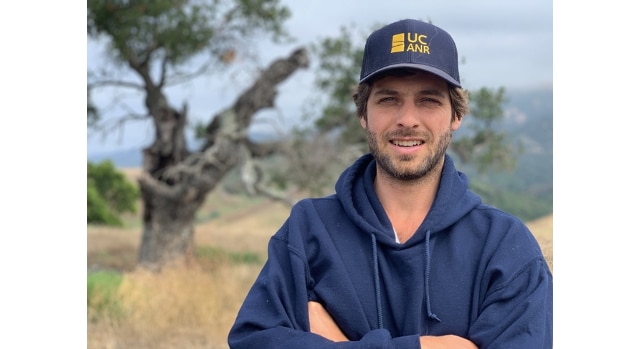 Matthew Shapero has worked as a UC Cooperative Extension livestock and range advisor in Santa Barbara and Ventura counties since 2017. (UC ANR)

DAVIS, Calif. — Rose Hayden-Smith, UC Cooperative Extension digital communications in food systems & extension educator, talked with Matthew Shapero about his work protecting California’s natural resources. This is the second in a series featuring a sampling of our academics whose work exemplifies the public value UC ANR brings to California.

Matthew Shapero is originally from California and has worked as an ANR Cooperative Extension livestock and range advisor since September 2017, based in Santa Barbara and Ventura counties. Matthew attended Columbia University and completed a Master of Science in range management from UC Berkeley. Prior to joining ANR, he farmed on the East Coast and in Nevada County, where he ran a ranch. His current research and Extension program focuses on several issues, including prescribed fire and how to prepare for and respond to wildfire. You can follow Matthew on Facebook and Instagram.

Tell us about your current research and Extension projects

I could certainly use the old ranching metaphor: “Way too many irons in the fire.”  As a beginning advisor, one says “yes” to things that seem interesting and have promise, but projects develop in their own time. I’m currently working a great deal on wildfire issues, including prescribed fire and fire recovery. There’s a need for long-term research to look at the effects of grazing as part of post-fire recovery. I am working with five ranches that experienced fire, and considering how land managers and agencies might be thinking about grazing and post wildfire recovery.

I’m also doing some research on soil seed bank, with a focus on how fire intensity impacts rangeland seed bank. [Editor’s Note: “Soil seed bank” refers to the natural storage of seeds – often dormant – within the soil of ecosystems.]

Has thinking evolved on prescribed fire?

It has. I received an M.S. degree in range management from UC Berkeley. The program didn’t cover much of the research and practices around prescribed fire, because it seemed to be an unrealistic land management tool in today’s day and age. The Thomas fire occurred in December 2017, just three months after I started my work as a Cooperative Extension advisor. I’ve seen the political winds shift since then; prescribed fire has become much more palatable in this area since Thomas, as a technique to proactively deal with the threat of catastrophic wildfire.

There’s a relatively short window (a couple of months annually) where the conditions and circumstances are aligned for prescribed burning. In Fall 2018, I was involved in a prescribed burn of 380 acres using a type of private burn permitting that hadn’t been used in a long time. As a Cooperative Extension advisor, I played a relatively important role in connecting the dots and helping that burn get up and off the ground. Part of my work is nudging people, following up, connecting people. I think my work is a good example of how a Cooperative Extension advisor inserts himself/herself into the process. With ranchers, private landowners, county fire agencies and others involved, there is a need for good communication.

In the aftermath of that burn, I organized an event for elected officials, agency heads, and other decisionmakers to visit the prescribed burn site. It was helpful for them.

My program covers Ventura and Santa Barbara counties, which have different histories with prescribed fire. Santa Barbara County has had a strong range improvement association from the 1950s through the present, which conducted prescribed burns at a significant rate up through the 1990s. For example, between 1955 and 1964, this association burned over 100,000 acres in private land, with little assistance from the county fire department.

This is in contrast to Ventura County, which has less of a surviving rancher-led burn culture. While producers burned within the county, there is no formal existing organization that plans and executes burns. I’ve been helping to revive burn culture in Santa Barbara County, but there’s been less to draw on in Ventura County. Both have county fire agencies instead of CalFire. They are supportive of private-led burning, but to actually implement prescribed burns is easier in Santa Barbara County than in Ventura County. Ranchers and private landowners in Santa Barbara are more comfortable with fire, and many have some of the resources required (water tending trucks, drip torches, flamethrowers, etc.). We’re building momentum, though, and the conversation has shifted since the Thomas Fire.

Did the Thomas Fire change perceptions about the value of ranchland in Southern California?

The Thomas Fire demonstrated that even if you live in a city or suburb, the way natural resources are managed impacts you. Livestock production is not an agricultural sector that generates a lot of gross revenue (it barely registers in the list of top 10 crops by revenue in each county), but it has great spatial impact. How it is managed impacts water quality, wildlife habitat, and the view those living on the peri-urban interface enjoy. There is important public and economic value in the way rangelands are managed.

What are the challenges facing the ranching industry in Southern California?

The challenges the ranching industry faces in Southern California aren’t necessarily new. I recently came across an Extension research bulletin published in 1972 that explained how Santa Barbara County was trialing new nitrogen fertilizer on rangeland. My predecessors identified “rising taxes and land scarcity” as challenges facing ranchers, and these things would still hold true.

These challenges are not unique in California, but the impact may feel different here. The Southern California counties in particular have a long and deep ranching history that was defined in many ways by Spanish ranchos.

The industry is potentially at a critical breaking point, though. It’s not just land, but the lack of supporting infrastructure. For example, it’s much more difficult to get cattle trucks down here; the nearest approved USDA slaughterhouse is hours away, and the nearest sale yard is in Kern or Monterey County. In Santa Barbara County, there is increasing pressure for land conversion and land use change. Many individuals are interested in creating vineyards and estates, which is breaking up and making into smaller parcels larger ranches, so that they can no longer be run profitably as livestock operations.

In an optimistic sense, there has been a shift in public opinion over the last 20 years about ranching. At one time, ranching was vilified as being harmful to land, especially public lands. The Bay Area has had more sophisticated conversations about how ranching and environmentalism can co-exist, and what the co-benefits are.

There is every reason to think that the conversation around ranching will mature and become more nuanced in Southern California as well. Topics such as water quality and endangered species – which seemed like flashpoints and a source of friction – have given way to discussions that identify areas of co-benefit. Ranchers do so much for wildlife in keeping rangelands open and undeveloped. But they are often targeted with what they regard as unfair legislation around fencing and vegetation removal. Urban public opinion should recognize the value of keeping ranchers on the land.

Why are you working for Cooperative Extension?

I’m interested in the public value aspects of the work. Traditionally, Cooperative Extension measured the impact of our work by the increase of forage grown per acre, or the number of pounds of beef extracted from a ranch. While those things are important, I see our role expanding. In addition to increasing agricultural production, my work is also about the potential to engage on policy and on a cultural level.

Livestock advisors throughout the state are an important point of nexus in terms of communicating the value of ecosystems management. We are often the connection between the broader general public and an agricultural constituency. I spend a lot of my time translating how and why ranching benefits the general public, why cattle might be good for the planet (not bad), and why cattle have ecosystem benefits for rangelands. I find as much as my work is increasing and improving herd health, it is also lubricating public policy discussions, and providing analysis that has benefits for ranchers and the general public.

Extension grounds positions in science and through neutrality. There is an important role for Extension in facilitating the conversations that identify mutual benefits.

Holstein Judges Conference to be held in CA

How are students in rural communities coping with school challenges?
September 22, 2020