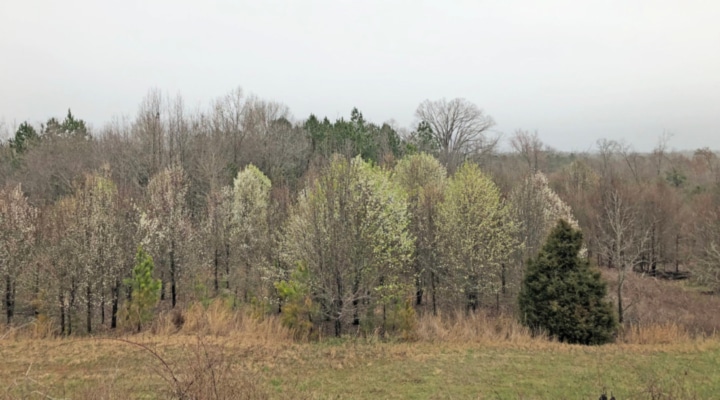 Bradford pears are not native to the United States, but have been widely planted in the Upstate for years. (Clemson University)

CLEMSON, S.C. — Bradford pear trees have become ubiquitous in the southeastern U.S. thanks to their attractive white blossoms in the spring and bright red foliage in the fall, but experts from Clemson University and elsewhere say their negative impacts on the landscape far outweigh any cosmetic benefits.

While this tree species — Pyrus calleryana — has been widely planted in the Upstate for years, most commonly as the Bradford pear cultivar, it is not native to the United States and thus functions as an invasive species — meaning they are not naturally present, create economic and ecological damage, and displace native species.

Bradford pear flowers have a pungent odor, and the trees often break during storms. Even worse, Bradford pear trees directly contribute to one of the worst invasive plant species in the Southeast — the callery pear. When Bradford pears are pollinated by another flowering pear cultivar or species, wild callery pears are the result. These get spread across the landscape after birds eat the fruits. Their thorns have been known to shred tractor tires and injure livestock.

“We know Bradford pears contribute to the callery pear problem in the Southeast,” said David Coyle. “These are the trees covered with white flowers in early spring across natural areas and roadsides. This is a problem because these callery pears take up the space where native trees would otherwise grow — and almost no species of wildlife eats callery pear.”

“One way to think about it is like this: Many birds feed on caterpillars, and if caterpillars aren’t eating the callery pear, then every pretty white Bradford or callery pear tree you see in spring represents space where a bird can’t eat. That’s just one of the negative environmental impacts that invasive species such as Bradford pears can have.”

With that in mind, Clemson Cooperative Extension is partnering with the City of Clemson and the S.C. Forestry Commission on the Bradford Pear Bounty program, which gives homeowners the option to remove Bradford pears and replace them with native trees.

Registration and tree reservation are required. Please see the Bradford Pear Bounty website for full details and a link to register for the event.

For more articles out of South Carolina, click here.

Working with cattle is just one side of new Clemson Farms director
March 30, 2020

Be safe and use caution during spring wildfire season
March 11, 2020