Home » Working the land a way of life 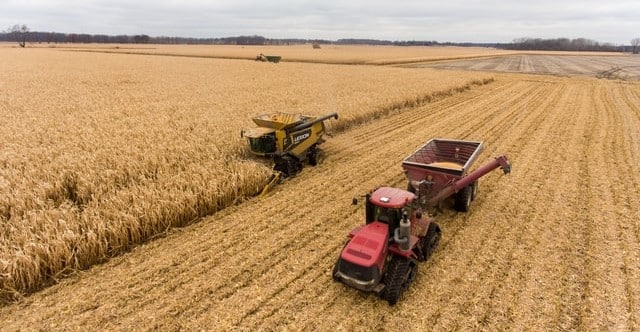 Chad said Henderson Farms encompasses 8,000 acres across Limestone, Madison and Morgan counties in Alabama with some in Floyd County, Georgia. He said the farm specializes in row crops, specifically corn, wheat and soybeans. (Stock photo by Loren King on Unsplash)

ATHENS, Ala. (AP) — Chad Henderson isn’t sure why his grandfather kept up farming from the previous generation, but he is certainty glad his forebears did. He said there are plenty of people who want to take up farming as a profession these days, but it takes so much capital investment that it has become difficult to get off the ground.

“A lot of farms started out as subsistence farms,” Henderson said. “People back then were just looking for a way of life. I never asked my grandfather why he started farming, it was just part of what he did.”

Henderson represents the fourth generation of his family working the land at Henderson Farms, with his son Jackson marking the fifth. Henderson helps run the business as part of a partnership with his father, Mike, and first cousin, Stuart Sanderson, with five other employees, counting Jackson.

Chad said Henderson Farms encompasses 8,000 acres across Limestone, Madison and Morgan counties in Alabama with some in Floyd County, Georgia. He said the farm specializes in row crops, specifically corn, wheat and soybeans.

Henderson Farms won a state competition in corn production, but Chad said learning how to increase the business’s yield per acre is more important to him than the accolade itself.

“Every state has a contest as part of the National Corn Growers Association,” he said. “You see how much corn you can produce on an acre and a quarter. We’re competitive, but we like to try and push things and try new technology. That patch is basically our research and development. It’s all about efficiency. Farms that stay in business are efficient.”

Henderson said the farm has 4,000 acres of corn, and the partners like to see what works on the smaller patch that can then be tried across more land.

Chad said his main responsibility at Henderson Farms is to help run the day-to-day operations off site. He said Sanderson does the marketing for the business, and his dad bounces back and forth between helping the two as needed. Chad said he and Sanderson plan out what to plant and where, and Mike takes care of the bookwork.

“It helps to spread all this work out,” Henderson said. “You just can’t touch it all. We’re always thinking a month ahead. We have to be ahead of the curve. My mind has been on planting wheat for the last two weeks, and we don’t plant until the end of October. But you have to make sure the fertilizer is out and the ground is prepared. You have to be ready for what’s coming.”

Henderson said next week begins the soybean harvest, and the farm will do soil sampling to help prepare for the winter season and the next crop.

As is true with any farm that has operations outdoors, the weather is always the biggest challenge Henderson Farms faces.

“It seems like it’s always too hot, too cold, too wet or too dry,” Henderson said. “You have to learn to deal with it and get it to play in your favor. If you spread things out you have a better chance of hitting the rain.”

Henderson said he and his family have been blessed, because his father and grandfather kept the farm going through the 1970s and ’80s when a lot of farms shut down.

It makes it easier to have that crutch,” he said. “I’m not having to help start this thing. This ball is already rolling, and it’s easier to keep it rolling (than to start from scratch). Too many people forget where they come from. You have to remember where you are at, because someone gave you an opportunity. But you have to put the work in to succeed, and that’s your choice.”

Farmers do not get regular work days and work hours like many professionals. Henderson said there is something he could do at work every day, and some days require extra hours.

“You work with the hand you’re dealt, but this is the job you picked, and you have to work hard,” he said.

Chad said he kept working at Henderson Farms when he got out of high school. He said he had no desire to continue his education at the time like his cousin Sanderson, who earned a marketing degree from the University of Alabama.

Though Henderson said perhaps he should have gone to college, he likely would have taken that knowledge back to the farm. He said he enjoys never having to do the same thing every day as part of his profession. In fact, he said that’s his favorite aspect of the job.

Henderson said there is something rewarding about putting a seed in the ground and watching it grow. He also said he and his wife, Marie, enjoy when local schools take field trips to the farm and the group has the chance to teach kids about farming and where their food comes from.

Henderson said giving back and advancing the field of farming are important to him.

“I’ll often think ‘what have I done to help lead my farm?’” he said. “What have we done for the next generation?”

Henderson said he thinks a lot of young people get a “bad rap” these days with people saying their generation doesn’t want to work. In his opinion, the issue is no one taught them what how to work and what hard work is.

“There’s a lot of young guys that will work hard,” he said. “Farming is a dying breed because it’s so expensive to do it. A brand new harvester alone is $600,000, and no one will lend (a prospective farmer) that kind of money. That’s why we try to help any young farmers with advice, because one mistake and you’re out of business and will take 20 years to pay the debt off.”

–By J.R. TIDWELL, The News Courier
via Associated Press