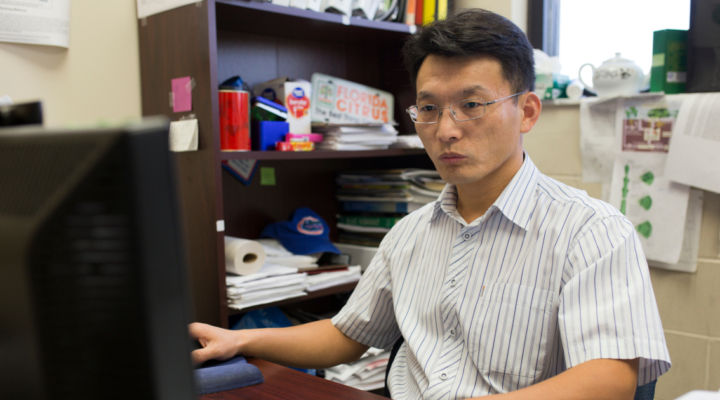 GAINESVILLE, Fla. — In the same year the University of Florida’s Citrus Research and Education Center celebrates its 100th anniversary, Nian Wang believes he may be close to finding the “off switch” for greening, the disease devastating Florida’s multi-billion-dollar-a-year citrus industry.

Wang, an associate professor of microbiology and cell sciences at the UF Institute of Food and Agricultural Sciences, is working with a relatively new gene-editing technique called CRISPR, an acronym for “clustered regularly interspaced short palindromic repeats.”

Scientists expect to use the CRISPR technique to generate greening-resistant citrus varieties by modifying the susceptibility genes within the plants, he said.

“First, we are working on identifying genes which make citrus susceptible to the greening pathogen,” Wang said.

Scientists know the greening disease as Huanglongbing – or HLB for short. A bacterium known as Candidatus Liberibacter causes the citrus greening disease. Trees and fruit can get infected when the Asian citrus psyllid — a tiny insect no bigger than a grain of rice — bites citrus leaves or stems.

Wang’s system works by tricking plants into sending itself instructions to cut off the gene sequences that program it to welcome disease into its cells. With CRISPR, he believes he is nearing the genetic “off” switch.

Theoretically, this technique could soon create a greening-resistant tree, said Wang, a faculty member at the UF/IFAS CREC in Lake Alfred, Florida.

He has already used CRISPR on grapefruit to cope with canker. Wang and his research team used CRISPR to modify the DNA in grapefruit, creating a new variety that is resistant to citrus canker.

Following that success, the Legislature provided Wang $1 million to use CRISPR to develop citrus varieties that are resistant to citrus greening.

Wang expects to make significant progress on the gene-editing process in the near future.

“This technology can generate greening-resistant and greening-tolerant genome-edited citrus varieties that are free of foreign DNA, and thus can be commercialized immediately,” he said.