Home / North Dakota / Work safely around grain
A new user experience is coming! We'll be asking you to login to your Morning Ag Clips account March 1st to access these new features.
We can't wait to share them with you! Read more here. 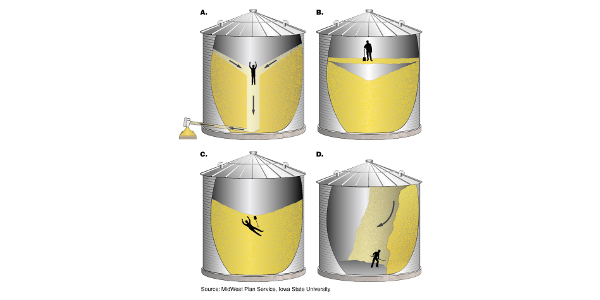 Grain Bin Dangers A. Never enter a storage bin while unloading grain because flowing grain can pull you in and bury you within seconds; B. Grain kernels may stick together, forming a crust or bridge that isn’t strong enough to support a person’s weight after the grain below it is removed; C. Don’t try to break a grain bridge or blockage loose from inside the bin; D. Try to break up a vertical wall of grain from the top of the bin, not the bottom, because the grain can collapse and bury you. (Graphics courtesy of MidWest Plan Service, Iowa State University)

“Too many people ignore safety practices and suffer severe injury or death while working around grain,” he adds. “They get trapped in grain, tangled in auger flighting, or develop respiratory problems from exposure to grain dust and mold particles.”

Never enter a bin while unloading grain or to break up a grain bridge. Flowing grain will pull you into the grain mass, burying you within seconds.

Stop the grain-conveying equipment and use the “lock-out/tag-out” procedures to secure it before entering the bin. Use a key-type padlock to lock the conveyor switch in the “off” position to assure that the equipment does not start automatically or someone does not start it accidentally.

“To determine if the grain is bridged, look for a funnel shape on the surface of the grain mass after some grain has been removed,” Hellevang advises. “If the grain surface appears undisturbed, the grain has bridged and a cavity has formed under the surface.”

Stay outside the bin and use a pole or other object to break the bridge loose.

If the grain flow stops when you’re removing it from the bin but the grain surface has a funnel shape and shows some evidence that grain has been flowing into the auger, a chunk of spoiled grain probably is blocking the flow. Entering the bin to break up the blockage will expose you to being buried in grain and tangled in the auger.

Follow recommended storage management procedures to minimize the potential for crusting or bridging and chunks of grain blocking unloading.

Also, never enter a grain bin alone. Have at least two people at the bin to assist in case of problems. Use a safety harness when entering a bin.

If someone gets trapped:

Even low-level exposure to dust and mold can cause symptoms such as wheezing, a sore throat, congestion, and nasal or eye irritation.

Higher concentrations can cause allergic reactions and trigger asthma episodes and other problems. Typical symptoms include shortness of breath; burning eyes; blurry vision; light sensitivity; a dry, hacking cough; and skin irritation. People may experience one or a combination of these symptoms.

In rare cases, severe symptoms, such as headaches, aches and pains, and/or fever, may develop. People’s sensitivity varies based on the amount and type of mold. In addition, certain types of molds can produce mycotoxins, which increase the potential for health hazards from exposure to mold spores.

The minimum protection for anyone working around moldy grain should be an N-95-rated facemask, according to Hellevang. This mask has two straps to hold it firmly to the face and a metal strip over the nose to create a tight seal. A nuisance-dust mask with a single strap will not provide adequate protection, he says.

Getting tangled in the unloading sweep auger is another major hazard. Entanglement typically results in lost feet, hands, arms, legs and frequently death due to the severe damage.

Although you shouldn’t enter a bin with an energized sweep auger, it may be necessary in some instances, Hellevang says. All sweep augers should have guards that protect against contact with moving parts at the top and back. The only unguarded portion of the sweep auger should be the front point of operation.

If someone must go into the bin, make sure to have a rescue-trained and equipped observer positioned outside the storage bin. Use a safety switch that will allow the auger to operate only while the worker is in contact with the switch.

Never use your hands or legs to manipulate the sweep auger while it’s in operation. The auger should have a bin stop device that prevents the sweep auger from making uncontrolled rotations.

For more information, check out NDSU publication “Caught in the Grain.” It’s available online at https://tinyurl.com/NDSU-CaughtinGrain.