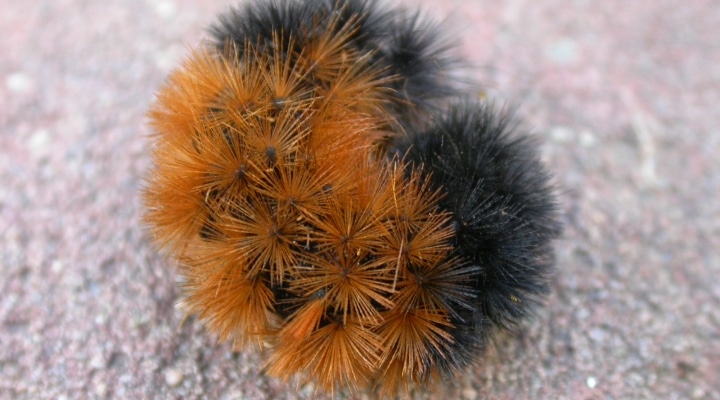 “The woolly bear caterpillar curls up in a fuzzy ball to protect itself.” (photo provided)

CHAMBERSBURG, Pa. — “Brown and furry, caterpillar in a hurry….” Why does the woolly bear cross the road? To get to the other side! Woolly bear caterpillars are a familiar and friendly sight in autumn, as they cross sidewalks and roads on sunny days, searching for that perfect spot under bark or in a log or rock cavity to hibernate for winter.

There are several species of woolly bear caterpillars, so named for their fuzzy appearance and winter hibernating habits. They range in color from all black to all white, some with bands, but all with bristly hairs which serve as protection against predators such as birds. Although some caterpillars have stinging hairs which can be quite painful to the touch, woolly bears are safe to touch.

When handled, woolly bears curl up into a tight fuzzy ball and “play dead.” The woolly bear of the dogbane tiger moth is light brown; the hickory tiger moth caterpillar has white and black hairs; the giant leopard moth’s woolly bear is all black with small red bands; while the spotted tiger moth larva is an all-white woolly bear.

But the best-known is the black and brown banded woolly bear, the larva of the Isabella tiger moth. There are two generations per year. This harmless caterpillar feeds in summer on plants such as dandelions, asters, clovers, maples, and weeds. The second-generation woolly bear hibernates over winter; in the spring, it feeds some before making a cocoon, from which the adult moth emerges in early summer. The Isabella tiger moth is a common, medium-sized moth with a stout body and yellowish-orange to cream-colored wings spotted with black.

In fact, the band length has more to do with the caterpillar’s age than with weather prediction. As the caterpillar grows, it goes through several different stages or instars, molting between each one. Each time it molts, the reddish-brown band becomes larger and the black bands at either end become smaller. The older it is, the browner it will be.  Barbara Bloetscher, an entomologist with Ohio State University Extension, notes, “Woolly bears hole themselves up somewhere for winter. What do they care what color they are?”

Still, it’s fun to examine the woolly bear gliding purposefully across your path.  Can you predict the weather from its bands? No, but you can enjoy the tickly sensation of its fuzzy hairs. Then, let it go near some leaves so it can find shelter from the coming winter storm.