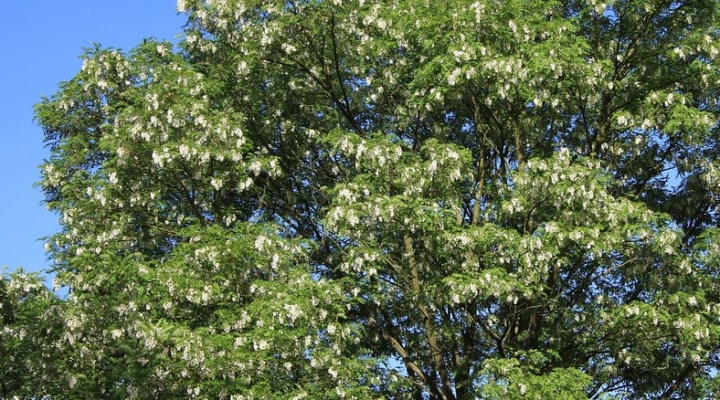 Few native species are aggressive enough to warrant production and sales bans in the southern United States, however they should be monitored. Above: Black locust. (Maja Dumat, Flickr/Creative Commons)

STILLWATER, Okla. — A literature review out of Oklahoma State University focused on notable woody plants that can disrupt biodiversity by behaving as a weed or an invasive plant.

Michael Schnelle to illuminates species important to the ornamentals industry and its consumers that, through natural geographical expansion, sheer aggressive growth in native locations, or anthropogenic activity, can sometimes be challenging to keep in-bounds, both in cultivation and in their natural geographic ranges.

The results of this review are in the article “Native Woody Plants of the Southern United States with Weedy or Invasive Tendencies: A Review of Common Offenders” published open access in the October print issue of HortTechnology.

Schnelle states of his literature review, “I wrote this manuscript to encourage people to not stereotype native or non-native plants, but rather to suggest that people should consider a species for its individual merits and shortcomings, regardless of its geographic origin.”

As his article verifies, a weed is normally defined as a plant, native or non-native, that is not valued where it is growing. An invasive species is generally defined as a species that not only spreads geographically outside its typical range but also has a proclivity for displacing native flora and fauna.

Often when a native species is deemed invasive, the invasion is associated with a horticultural disturbance. However, changes in climatic conditions that have transpired over recent decades have resulted in altered population dynamics of native species and, thus, their geographic ranges.

Five woody species–black locust, yaupon holly, black cherry, snailvine, and southern waxmyrtle–are all native to Oklahoma and nearby states. They all have varying levels of use in and importance to the United States nursery industry.

These native plants have migrated to, and have become increasingly dominant, in other regions of the United States because of prolific fruit loads dispersed by birds and mammals, anthropogenic disturbances, overgrazing pastures, and certain species’ tolerance of environmental extremes.

Few native species are aggressive enough to warrant production and sales bans in the southern United States, however they should be monitored.

Schnelle advises that conservationists and land managers should organize priorities based on whether species are producing benefits or harm to biodiversity, human health, ecological services, and economies.

Potential control measures include, but are not limited to, chemical applications, timely cultivation, heightened awareness of grazing practices, and prescribed burning.

The onus is on scientists, growers, and consumers to keep a watchful eye on land stewardship and other factors that could influence a species’ performance relative to other plants in the same biological community. The native species, like introduced plants, should be judged on a case-by-case basis.

Schnelle suggests that plant selection for a landscape should be predicated on environmental benefits, aesthetic value, and long-term maintenance considerations, including the potential for unwanted spread regardless of the origin of the species.

Schnelle adds, “I do hope the public will find the time to read the article in its entirety to gain a better grasp of the complexity and potential for environmental degradation when native-born plant species go rogue. The first step toward solving a daunting problem of this nature is to fully understand its scope.”

What to monitor on native rangelands in May
May 7, 2020