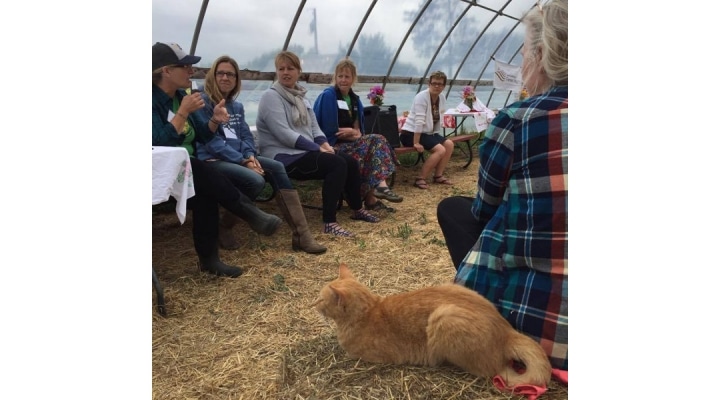 MARSHFIELD, Wis. — When it comes to agricultural safety and health, we humans can be too optimistic. Take, for example, women who are new to organic farming. A recently published study indicates that these farm moms may have an optimism bias about how safe their farms are for children. This bias – the belief that they and their families are less likely than average to experience a farm injury or other negative safety event – could potentially cause these mothers to ignore or downplay safety messages.

“While the participants acknowledged that farming could be dangerous, they believed at a very high rate that their farm was safer than other farms,” said co-author Kathrine Barnes, M.S., M.P.H., a project manager with the National Farm Medicine Center, Marshfield Clinic Research Institute, Marshfield, Wis.

Rates of organic farms and women organic farmers are increasing. Since many of these women are of child-bearing age, and child agricultural injury is a significant threat, the authors said it is important to better understand these mothers’ attitudes toward child injury risk and their sources of safety knowledge.

The study was supported by the National Children’s Center for Rural and Agricultural Health and Safety under a grant from the National Institute for Occupational Safety and Health (NIOSH).

Among respondents with children, nearly half (47 percent) rated the typical farm unsafe for children. Among those same respondents, 82 percent agreed their farm is safer for a child compared to similar farms.

“The optimism bias didn’t surprise me as it’s understandable that we as mothers feel we are doing the best we can to prioritize safety,” said Lisa Kivirist, a co-author of the report and member of MOSES at the time of the survey.

The use of messaging to overcome bias has been well-studied, Barnes said, but she’d like to see more research on adapting messages for a farm audience.

“I think it would be really cool to study … how that messaging actually ends up influencing people’s behavior,” she said.

Barnes said the research team got good response to the questionnaire, which was distributed to women at events centered on organic and sustainable agriculture — not safety. The women had paid to attend and travel to the events. The sample size was small, she said, with most attendees from the upper Midwest.

“Analysis on such a small group wasn’t complex,” Barnes said. “But we found that they were very optimistic about farming. They spoke qualitatively … glowingly about the ability to raise children on their farm.”

Respondents tended to be from city centers who were new to farming and had not grown up on farms. Many either had children or intended to have them in the near future. The parents wanted to raise their children on a farm and were interested in home schooling.

“With a large segment of new women farmers coming into farming without an agricultural background or from a farming family, many of these issues are completely new and not on their radar,” Kivirist said. “I found the opportunity to have an impact via education with beginning and new women farmers to increase understanding and awareness of these important on-farm safety issues very important.”

As a safety researcher, Barnes sees a classic problem. “We care very deeply about keeping farmers and everyone who visits or works at a farm safe. But that’s not top-of-mind for everyone who’s driven to feed and nourish the nation,” she said.

As a result of talking with these women, Barnes would like to nestle a safety message into something more appealing.

She noted the women who attended the conferences were self-motivated to learn about and achieve organic certification, to find sources of money for their farms and to learn new farming techniques. “But for safety, they don’t go out of their way to search out that literature,” Barnes said.

“No one wants to attend a safety session for anything,” agreed Jennifer Nelson, organic specialist contractor with MOSES. “It’s too scary. It’s not as fun.” MOSES offers a beginning farmer intensive program, which offers lots of information on business planning, marketing and growing a farm business, but attendees want to know how to grow blueberries, she said.

Because many parents are interested in home schooling – especially during COVID – safety messages could be incorporated into a curriculum on the farm. Physics, chemistry, biology and safety could be teaching tools, Barnes said. For example, a lesson could teach the physics of how a tractor rolls over and why a roll bar works. Another could explain how pesticides and herbicides work, what happens when they get into the body and how to keep ourselves safe. That safety message can be embedded into things that are more relevant to farmers’ day-to-day lives.

Kivirist agrees to an extent. “Homeschoolers would be a great but tricky population to connect with as curriculum and communications are not centralized. Sharing information at women-farmer focused field days and beginning farmer trainings, particularly shared by peers, would be an effective target.”

Learning from their peers

That concept lends itself to the type of networking and knowledge transfer between peers seen at MOSES events, Barnes said. New female organic farmers may prefer word-of-mouth-type and experiential resources over those that seem authoritative, according to the research data.

“They were thirsty for connection to other people in their situation,” Barnes said.

As a result, “People with a lot of knowledge became very popular at these events,” Barnes said, because of “that feeling that someone else in my position will give me information I can trust.”

Nelson agreed. “In a rural area, you’re isolated, so you crave these relationships with other farm mamas,” she said. “It’s really a network-based community.”

“The learning circle model of peer-based learning is very effective with women and draws on our natural collaborative learning style,” Kivirist said.

Connecting with community groups and organizations that serve these women could be another way to deliver a safety message and benefit the farmer.

“On-farm safety related to kids is a vital but still often overlooked topic,” Kivirist said. “There is strong opportunity to connect with and instill among the beginning women farmer population the inherent importance of safety and to keep that a priority in their farm practice, just as food safety practices are.”

The Journal of Agromedicine, edited by the National Farm Medicine Center since 2004, is the world’s No. 1 source of peer-reviewed agricultural safety and health information.

–National Children’s Center for Rural and Agricultural Health and Safety