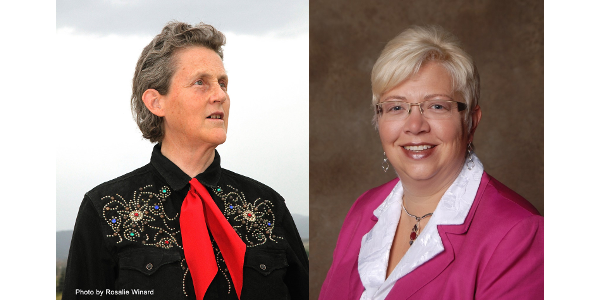 World-renowned animal behavior consultant, and prominent author and speaker, Temple Grandin (left) and Dr. Jacqueline Applegate, head of environmental science for CropScience, a division of Bayer (right) keynote the 2018 Women in Agribusiness Summit, which will be held in Denver, September 24-26. (Courtesy of Women in Agribusiness)

Dr. (Mary) Temple Grandin, a prominent author and speaker, is a professor of animal science at Colorado State University. She is most noted for her contributions to the field of animal welfare, which she argues were fueled by the insights and sensitivities that are a consequence of her autism. Dr. Grandin advises agribusinesses such as Cargill on ways to improve the quality of life of their cattle. Her revolutionary cattle-handling system transformed the U.S. meat industry in the 1990s, and is now utilized far beyond North America and involves a broader range of livestock and poultry in production facilities across the globe.

Widely recognized for her work, Dr, Grandin is the recipient of several awards, including those from the Livestock Conservation Institute and the American Meat Institute. In 2010, she was named one of TIME magazine’s 100 Most Influential People in the World. She is the recipient of several honorary degrees, and has been featured in a variety of radio and television programs, including a well-received TED talk.

Dr. Grandin has penned several books in the area of animal welfare, and her life was chronicled in a 2010 movie entitled Temple Grandin, which received 15 Emmy Award nominations and won five. She holds a bachelor’s degree in psychology, and master’s and doctorate degrees in animal science.

Dr. Grandin’s keynote presentation on opening day of the Women in Agribusiness Summit will focus on the importance of companies across the agricultural value chain adopting more transparent practices to earn consumer trust.

Dr. Applegate, the only woman on Bayer’s Executive Committee, will share the journey of her 25-year career in her keynote address: “Enjoying the Journey: How to Take Advantage of Opportunities, Big and Small,” which will focus on how her longtime career with Bayer continues to thrive. She will offer her first-hand experiences, observations and lessons that have been the foundation of her success. In addition, Dr. Applegate will share why she continues to be passionate about the industry and why she’s excited for what the future holds for Bayer, particularly with the upcoming $66 billion acquisition of Monsanto.

“We are honored to feature two such accomplished professionals, who are recognized globally for their achievements and perseverance in affecting positive change in the agricultural space,” said Joy O’Shaughnessy, WIA managing director. “They are examples of what is possible when one is passionate and determined, a testament to the qualities we see again and again in the attendees at our Women in Agribusiness Summit.”

More than 600 attendees are expected at the Women in Agribusiness Summit, representing as many as 39 U.S. states and more than 200 agricultural companies. Learn more at www.womeninag.com, and join us @Womeninagri, on Facebook and LinkedIn.

About Women in Agribusiness

Women in Agribusiness is a business unit of HighQuest Group, a global agribusiness consulting, events and media firm. The Women in Agribusiness initiative took root in 2012, with the first conference held in Minneapolis. WIA initiatives have grown to include the WIA Membership, WIA Demeter Award of Excellence, Scholarships, and the WIA Quarterly Journal. Learn more at www.womeninag.com.

— Women in Agribusiness via PRNewswire