Home » Women in Ag Webcast to be held June 8th 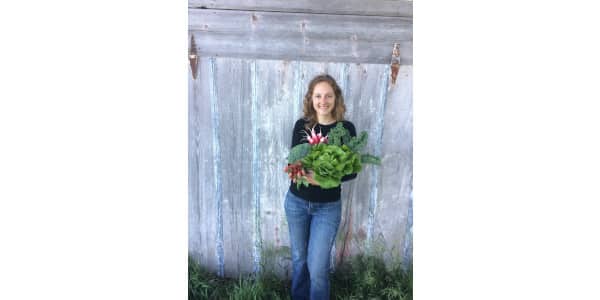 “Open for Business: A Nebraska Women in Agripreneurship Series” will feature Katie Jantzen, founder of West End Farm, during its next live webcast on June 8 at 6:30 p.m. (Courtesy of Nebraska Extension)

LINCOLN — “Open for Business: A Nebraska Women in Agripreneurship Series” will feature Katie Jantzen, founder of West End Farm, during its next live webcast on June 8 at 6:30 p.m.

Produced by Nebraska Women in Agriculture, the monthly webcast series highlights the entrepreneurial spirit of women in agribusiness from across the state, offering creative insights and the stories behind what it takes to build a business.

The conversations focus on surviving business shocks such as disasters, regulatory changes and shifting family dynamics. Featured business leaders are interviewed by Brittany Fulton, extension assistant with the Nebraska Women in Agriculture program.

Jantzen founded West End Farm in 2017 on part of her family’s farm near Plymouth. She raises 47 different types of vegetables, berries, melons and herbs, and also sells honey, jam and baked goods. West End Farm features approximately one-half acre in vegetable production, including a newly constructed high tunnel, a small berry patch and 10 honeybee hives. The main marketing venue for her crops is the farm’s CSA (Community Supported Agriculture) program, in which customers sign up for a produce subscription and receive a weekly box of fresh vegetables all season long.

She also sells her products at the Beatrice Farmers Market and to a couple of wholesale accounts. Jantzen’s interest in local food has been influenced by a range of experiences, including growing up on a dairy farm, studying environmental science in college, managing a community gardening program for a food pantry and working on CSA farms in several states.

When not working on the farm or at her town job, Jantzen is also involved in a variety of food and agriculture organizations, including the Southeast Nebraska Food Partners food coalition, Nebraska Food Council, Nebraska Farmers Union, Nebraska Sustainable Agriculture Society and Women in Local Food and Farming, as well as several research projects with the Center for Rural Affairs.

The webcast is free to attend but registration is required on the Nebraska Women in Agriculture program website, https://wia.unl.edu.

Recording available of webinar on economic recovery in ag