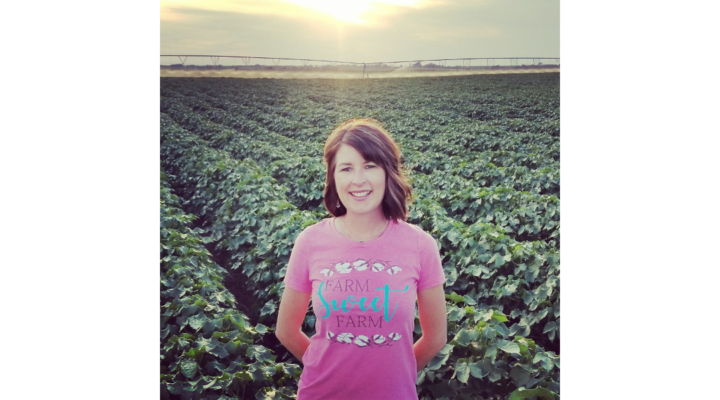 ERICK, Okla. — It is true, there really is no place like home.

When Lindsay Coker left her family farm at the age of 18 to pursue a college education, she had no idea she would return17 years later.

“My dad said he would pay for college under two conditions: first, I couldn’t take any agriculture classes, and second I couldn’t become a lawyer,” Coker recalled with a laugh.

Coker grew up on her family farm where they ran a commercial beef herd and raised wheat and cotton. From a young age, she and her brother worked on the farm with her parents and grandfather.

“It truly is a family farm,” Coker said, “We all had to work together. It wouldn’t work without the entire family being involved.”

Coker said she and her brother never knew her parents faced difficulties from farm life when they were younger.

“I never knew we struggled, and looking back now as a parent I admire them even more because they never let the kids know if they were struggling,” Coker said.

But Coker’s father was familiar with the hardships his parents and his own farm faced with fluctuating markets and didn’t want those same struggles and uncertainties for his daughter, which is why he urged her to go to college and not become a farmer.

She heeded his advice and majored in business with a double minor in accounting and finance at Oklahoma State University. The Saturday after graduating from OSU, she married her best friend, Brian Coker.

“I met my husband in the 5th grade,” Coker said. “We were best friends throughout high school and went on to OSU together. It wasn’t until after high school that we realized our friendship was more. We graduated OSU one Saturday and the very next Saturday we got married.”

They spent their first three weeks as a married couple helping her family with wheat harvest before moving to Houston where Brian had accepted a job in the oil and gas industry.

“We actually ended up working at the same company at first, which we thought was great as newlyweds,” Coker said, “but after surviving three rounds of layoffs together we realized it probably wasn’t great to have both of our incomes at the same place, so I went to look for another job.”

In 2008, they had their first child, a daughter named Emma. Coker continued working for two more years, but because her job required a lot of travel, sometimes overseas for extended periods, they made the decision for her to stay at home and raise their family. In 2012, they welcomed their son Ethan into the world.

It was then that they decided they did not want to raise their family in Houston, or be so far away from their families. When Ethan was 6 months old, they moved to Blanchard.

After returning to Oklahoma, they spent a significant amount of time at the family farm on weekends to help during what Coker referred to as the “busy season.”

“I began to feel in my heart that I wanted our children to have the same experiences that I had as a child, but at the same time, it honestly scared me because I could hear my dad telling me not to be a farmer,” Coker said.

So when her dad sat them down and asked if they were at all interested in coming back to the family farm, she couldn’t have been more shocked.

“I asked him why he told me to go to college and not be a farmer and now he was changing his story, and he said ‘I didn’t think about getting old at the time!’” Coker laughed.

She and Brian both felt in their heart that they belonged on the farm, but he had a great job in Blanchard that was more financially stable than farming. She said they continued to pray for guidance.

When the president of the one and only bank in Erick called Brian and offered him a job, Coker said they knew their prayers had been answered. They moved to Erick at the end of the summer in 2015, and began building their “forever home” that fall.

“I joke and tell him that he funds my farming habit,” Coker laughed. “But really, he is our security in rough years. There is so much uncertainty in farming, it’s nice to have that anchor.”

But no matter how much prices fluctuate, or what obstacles mother nature brings, Coker feels it’s only frustrating if you let it be.

“I really feel like it’s a calling to be a farmer,” Coker said. “Farming is more fulfilling for me than working corporate ever was. The fiber we produce makes clothing, feeds animals, and makes so many other products. I feel like I make more of an impact this way.”

It is primarily Coker and her father that run the day-to-day operations on the farm. Her mom stays busy with her business selling seed, herbicides, pesticides and fertilizer, but is always there to help when they need it. When it comes time to harvest, Coker said her mom can pack the tightest module of anyone she’s ever seen.

Coker loves spending her days with her dad spraying cotton, scouting fields, working cattle, and various other farm tasks, and she takes those opportunities to learn as much as she can from him.

“I’m always trying to soak up his knowledge and ask him as many questions as I can think of,” Coker said. “I learn so much when we are just driving and talking.”

Coker said she learns something new every day, either from her father, or from other multi-generation farmers in the area. One of the many things she continues to learn is how to take care of the land.

“The Bible tells us to be good stewards of the land, so that’s always in the forefront of my mind,” Coker said. “We have to take good care of the land not just for us, but for future generations as well.”

Coker said she has no doubt that her son Ethan will be the 5th generation farmer. Though her daughter Emma enjoys it as well, she said her son lives and breathes it.

She is confident her children will learn the same skills she did on the farm: how to work hard, be persistent, pay attention to detail, solve problems, manage time and adapt to any situation.

Some of her favorite time as a family is spent together in the field during planting and harvest.

“There is no greater blessing in life than family, and to be able to do this with our family is amazing,” Coker said. “I get to spend every day with the people I love.”

Coker said there has never been one day that goes by that she isn’t thankful she came home.