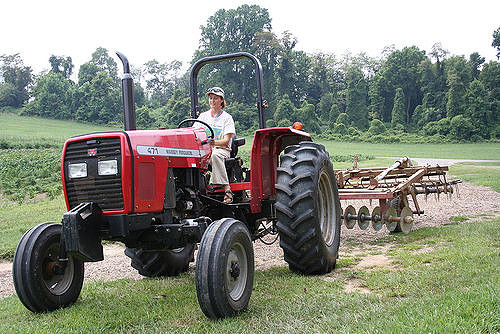 While data for the next USDA Census of Agriculture is currently being collected, women farmers in New Hampshire are certain they're in good company, considering the 2012 census showed their peers made up 42 percent of farmers in the state. (Photo by aaron, creative commons/flickr.com)

STRATHAM, N.H. (AP) — A young child wearing a pink dress, fairy wings attached to her back, watering seeds in the family greenhouse. That is Forrest Barker’s favorite photograph of herself.

Now 23, she may not have the fairy wings, but Forrest’s passion for the farmland on which she grew up has only swelled. She took that zeal to Cornell University to study agricultural sciences, and returned after graduation to the multiple-generation farm off Route 33 in Stratham.

Forrest does it along with her mother, Edie Barker, in honor of her dad, she said.

Kate Donald started sowing the seeds of her future in urban gardens in New York City. Now one of the biggest suppliers of greens to Seacoast restaurants, her 60-acre property in Brentwood, Stout Oak Farm, is the center of connection for Donald. Community relationships start there, in the ground.

While data for the next USDA Census of Agriculture is currently being collected, women farmers in New Hampshire are certain they’re in good company, considering the 2012 census showed their peers made up 42 percent of farmers in the state. That was nearly six years ago, and women’s interest in agriculture has increased. At that time, the Granite State was No. 3 in the nation for women principal farmers as a percentage of total operators.

In addition to a rise in young farmers, Clary said New Hampshire is also seeing older women who are deciding, “I’ve already had my corporate career, I’m going to buy a farm.”

On the Seacoast, many women are leading the way, feeding the community and caring for some of the nearly 80,000 acres of land owned by women farmers in the state. Some have been here for decades, while others chose the region in their quest for “the perfect soil.”

The altered Wendell Berry quote written on a white board in one of Kate Donald’s greenhouses is somewhat faded. It’s been there a long time.

“A good farmer is a crafts (wo)man of the highest order, a kind of artist,” it reads.

Donald co-owns Stout Oak Farm with her husband, Jeff, but she says, with a chuckle, he calls himself “the farmer’s wife.” Their organic vegetable farm sits on interesting topography off Middle Road in Brentwood; slopes, ledges and hills.

It’s a gray Friday afternoon, light rain pelting the tops of the greenhouses on the property. Donald wears a baseball hat that reads, “Feed the soil.”

Donald is responsible for starting the first formal Community Supported Agriculture (CSA) model in Brentwood in 2004. Today, many Seacoast restaurants rely on Stout Oak Farm for local greens and various vegetables. Some of their biggest customers are Moxy, Franklin Oyster House, Black Birch, the Oak House, Laney & Lu, Blue Moon Evolution and the Foundry in Manchester.

Donald, 46, wasn’t always a farmer. She found the occupation in her 20s, in an effort to “combine live, work and develop a business all in one place.”

Growing up in rural New Hampshire, she attended the School of Foreign Service at Georgetown University. “I was interested in making a change and getting involved, finding a useful thing to do with my life.”

When Donald realized she was qualified for “desk jobs,” she didn’t see a path forward. She joined AmeriCorps, developing urban gardens in Portland, Oregon. From there, she did similar work in New York City, helping urban gardeners boost food production to supply food pantries and soup kitchens. A two-year farm and garden apprenticeship at UC Santa Cruz followed, a “boot camp for organic vegetable farmers,” she said.

“I’ve found that we thrive when we’re investing in the systems that we’re using, investing in ourselves, getting better at our jobs,” Donald said. “Food really connects people.”

Aside from Donald’s husband, the entire Stout Oak crew is women. “I’m proud of the fact that this is a women-run farm,” she said. “We’re trying to create a culture of great customer service and high-quality products, but the relationships are at the center of everything we’re doing.”

Some days are harder than others, Donald said. But they continuously look to the future, what they can do next. “Just keep putting seeds in the ground,” she said.

When asked what advice she might give others looking to get into the industry, Donald said farming takes “a ton of motivation” and a willingness to learn about yourself.

“I just think it’s really important for each of us to decide how we spend our time,” she said. “I am happiest when I’m moving around and I’m outside, doing something productive where I can see a result. Every farm is so different, it’s highly customizable.

“Everything you’re doing you’re able to have your imprint on your land and your business. This is something you can build a life on that’s based around community.”

Longtime Stratham fixture Gordon Barker died suddenly at age 50 in 2009. He was a selectman, a driving force for preserving open space in town, and president of the Stratham Park Association. The town forest is now named after him.

After his death, Edie Barker, his wife, took over the farm. She was committed to safeguarding the 88 acres her husband had left his mark on.

Today, Edie and Forrest Barker are a mother-daughter team to be reckoned with.

“I’m pretty independent,” Edie said. “I like solving my own problems. In our business, we have problems to solve every day. Recently, we had to figure out how to repair the greenhouse before the next storm came. It’s constantly problem-solving and then being creative, being independent, doing something that fulfills you.”

Growing up, Forrest said helping out on the farm was her normal day-to-day. She recalled having to pick 11 boxes of strawberries as a rite of passage to attend the Stratham Fair in the summertime.

“I was just dirty all the time,” Forrest said of her childhood. After attending Phillips Exeter Academy and participating in various farm immersion experiences, she took her interest to Cornell.

“I just loved all of my classes there,” she said. “As much as I love farming, it’s also the business side. If you want to successfully support the community, you have to have a good business. Our family has been taking care of this land (for generations) and it’s my responsibility to make sure that the soil is still healthy for generations to come.”

Because of her father, Forrest’s return to the family farm wasn’t even a question. She is carrying on his legacy.

Edie said Barker’s Farm is “primarily vegetables, with a side of cut flowers and strawberries.” At their roadside stand, they’re known to sell other local products, such as meats, baked goods and milk. “So when people stop at our stand, they can bring home dinner,” Edie said.

What gets the pair going in the morning is the farm’s symbiotic relationship with the community. They’re quite supported, and are familiar faces at the Exeter and Portsmouth farmers markets.

“I love when people say how much they love our vegetables,” Forrest added.

Annie’s Project is a national initiative designed to empower women in agriculture and strengthen their roles in farming enterprises. Classes are currently being taught in 33 states, including New Hampshire, where it debuted in 2014 as part of the UNH Extension.

More women have also been inquiring about equipment training such as chainsaw work, tractor safety and how to properly load a trailer.

“Historically, women have been under-served,” McAdam said. “In the early 2000s, the USDA found women and minorities not being represented in USDA offered programs. It’s definitely our responsibility to make sure we are doing everything we can to support them.”

Personally, McAdam said she grew up on a dairy farm working for her parents. She would load compost into trailers for customers, “and people were taken aback. I can see where women would feel a barrier there. And we are breaking down those barriers.”

Elaina Enzien, a dairy, livestock and forage crops field specialist, comes from a women-run farm. “It’s a different background in a way, because I grew up with a strong women farming background. I knew that women were still seen as a minority in agriculture, but I didn’t really feel that in New Hampshire. I feel like in a way we’re leaders as far as women in agriculture.”

Being part of Annie’s Project, Enzien said, has been an important experience in bringing women together and “empowering them to really step up and take charge of their situation. We have lots of women stepping into this agriculture light.”

Annie’s Project offers various retreats around New Hampshire each year. Their next three-day course will take place at Alnoba in Kensington beginning April 20.

Lorraine Stuart Merrill remembers being contacted by a Boston Globe reporter in the 1990s, when the USDA started publicizing farmer gender statistics. At that time, New Hampshire was No. 1 in the nation for percentage of farmers who were female, she said.

“The reporter said, ‘Wow, what is it like to be part of this exciting new trend?’ The first thing that came to my mind was, ‘Well, it’s not just a new exciting trend, it’s a longtime exciting trend. My own grandmother was an incredibly important person on my family’s farm,” Merrill laughed.

But on the other hand, women’s involvement in agriculture has evolved and changed over the years, the dairy farmer said. In New Hampshire specifically, Merrill credits women farmers with shaping the farm-to-table concept and direct sales to the public.

Merrill retired last year from her post as the state’s agricultural commissioner. Long before that, in 1981, her family became one of the first in the state to permanently protect their land, Stuart Farm in Stratham, through an agricultural conservation easement.

In her years as commissioner, Merrill said it was the diversity of women entering the field that she noticed.

But what they all have in common, she said, is a love of the land, diligence, perseverance and “that independence factor.” She noted more recently, there are new groups of immigrant farmers in Manchester, Nashua and Concord who are mostly women. They’re running programs where they feed their own families while being able to make some money.

As far as the notion that women farming in the Granite State is “a new trend,” Merrill snickers. She finds solace in knowing perhaps her grandmother was one who laid the groundwork for the ladies transforming the industry today.