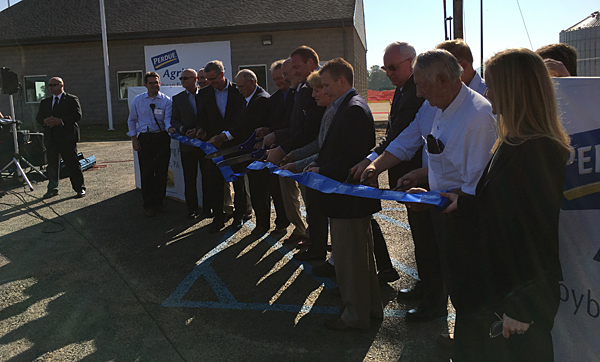 Purdue Agribusiness received an $8.75 million Redevelopment Assistance Capital Program grant from the commonwealth, which spurred an investment in Pennsylvania’s economy of more than six times that amount. It will continue to pay off in the form of new jobs and expanded market opportunities for area soybean growers and livestock farmers.

“This plant builds on Perdue’s investment in Pennsylvania and our commitment to Pennsylvania farmers,” said Perdue Farms Chairman Jim Perdue. “It also sets a new standard in terms of community investment, economic potential and environmental gains. We truly appreciate all of the support we received from the governor and his entire administration to get this project up and running. This plant demonstrates our shared commitment to ensure agriculture remains strong and farmers have every advantage they need to remain competitive.”

The $60 million facility has the capacity to process 17.5 million bushels of soybeans per year, producing soybean meal and oil that is then sold as animal feed ingredients and as inputs for food processors, among other uses.

“When the state committed to this project, it did so because we recognized the opportunities it held for Pennsylvania’s farmers,” said Agriculture Secretary Russell Redding. “This plant is going to create new demand for soybeans grown here, and it’s going to help existing growers get a better price because they won’t have to ship their beans out of state, and it’s going to offer another close-to-home option for processed soybean meal they can use to feed their animals.”

Most soybean producers previously had to transport their crops out of state for processing, then back to the state for sale. The new plant more than doubles the capacity for Pennsylvania-produced crops to be processed locally.