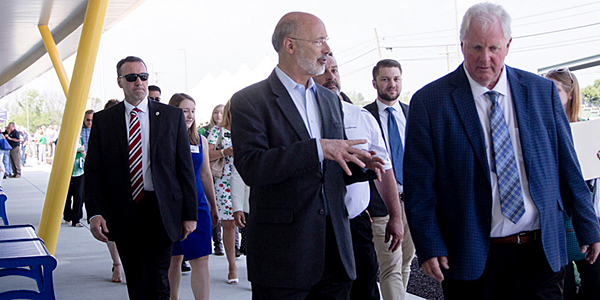 During the grand opening of the nation’s first humane, animal-welfare-focused hatchery, Gov. Tom Wolf pointed to the potential of Pennsylvania’s agriculture industry to produce a vibrant economy with jobs that pay in rural communities. (Office of Gov. Tom Wolf)

FREDERICKSBURG, Pa. — During the grand opening of the nation’s first humane, animal-welfare-focused hatchery, Gov. Tom Wolf pointed to the potential of Pennsylvania’s agriculture industry to produce a vibrant economy with jobs that pay in rural communities.

“We all know how close agriculture is to the heart of Pennsylvania,” said Gov. Wolf. “The products we grow and produce here fuel our people, the world, and our state’s economy. The commonwealth has supported Bell & Evans in the past and that support is helping to drive a broader expansion here,” Gov. Wolf said. “The partnership between the commonwealth and innovative job-creators like Bell & Evans represents our commitment to supporting our agriculture industry and doing all we can to help our farm families grow and thrive.”

The new hatchery is the first of its kind in the United States. Bell & Evans partnered with Netherlands-based companies HatchTech and Viscon to design this new hatchery concept, which is free of antibiotics, does not use machines to handle the chicks, and feeds all chicks organic mini-pelleted feed from grains grown only in the U.S. The operation hopes to become the first certified organic hatchery in the world.

Bell & Evans previously received a $1.9 million funding package from the Department of Community and Economic Development for a three-year expansion project that was completed in 2016, adding over 400 local jobs. The new, privately funded hatchery further expands the business.

“Bell & Evans is among the more progressive, forward-thinking producers in the country,” said Agriculture Secretary Russell Redding. “They are among the leaders in the natural foods market, positioning themselves well to capitalize on changing consumer demands and preferences so that today, they are among the nation’s premier suppliers to upscale markets. The growing demand for their products is helping the region’s agriculture economy as the company adds more growers and more houses.”

Redding noted that Bell & Evans is the largest of five poultry processing and wholesale companies in Lebanon County, where the industry is 1,815 percent higher than the national average in terms of number of jobs, and has grown at 45.6 percent over the past 15 years, while it has declined six percent nationwide.

The company’s president and CEO, Scott Sechler, is working with the commonwealth to position the state’s agriculture industry to capitalize on market opportunities over the next decade.

“Our mission to change the way chickens are raised in the United States has many pieces — using only U.S. grown grains, pioneering the elimination of antibiotics and setting higher standards in animal welfare. This organic hatchery is the next milestone,” Sechler said. “We appreciate the ongoing support of Gov. Wolf, the PA Department of Agriculture and our county and local officials in helping us make it happen. Pennsylvania is our home and we’re proud to be part of its leadership in agriculture.”

Sechler serves as the private-sector co-chair of the Team Pennsylvania Agricultural Advisory Committee. Secretary Redding serves as the public-sector co-chair. The committee, formed earlier this year, is part of a strategic partnership between the Department of Agriculture and Team Pennsylvania Foundation to address barriers to growth in the agriculture industry and to identify and capitalize on opportunities for economic development.