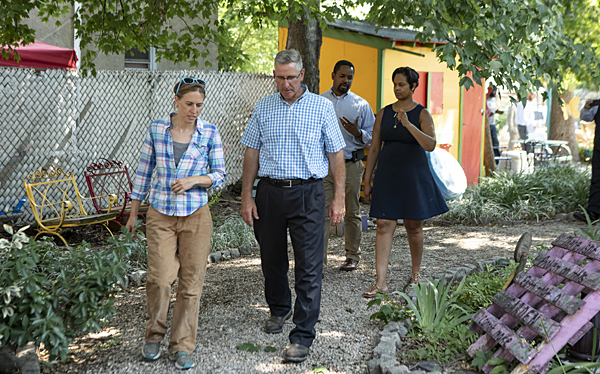 “Gov. Tom Wolf and I share the belief that agriculture has the power to change lives, and that power was made clear during this week’s tour,” said Secretary Redding. “During my visits, I met dozens of Pennsylvanians who have come together through the power of a simple garden, building a stronger sense of community and proving that agriculture is truly zip code neutral.”

As part of the Department’s Planting the Seed Tour, Redding traveled to Philadelphia on Monday, touring Bartram’s Garden, Glenwood Green Acres Urban Farm and the Norris Square Neighborhood Project. On Tuesday, he visited Pittsburgh’s Ballfield Farm, the Homewood Historical Urban Farm and Mount Oliver Community Garden. On Thursday, he stopped at community garden at Altoona’s Providence Presbyterian Church. The Planting the Seed Tour recognizes opportunities to engage and educate the next generation of agriculturalists and those new to the agriculture industry, by bringing to light the wealth of opportunities in Pennsylvania agriculture.

“The socialization that these gardens offer, the ability to harvest food that one has had a hand in growing — these are the meaningful experiences that urban agriculture can provide,” said Redding. “The feeling of being more connected to the land and to the community, in any setting, is valuable beyond words.”

Land-use webinar to focus on dealing with difficult issues
August 14, 2022