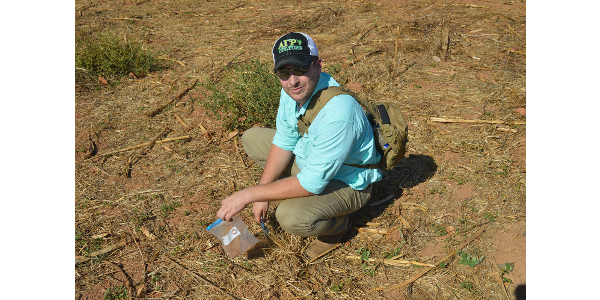 In Africa, Steinacher collected soil samples and evaluated the limiting factors of the selected fields. (Courtesy of WIU)

Todd Steinacher, a 2006 agriculture graduate, is a regional agronomist for the AgriGold Seed Company in west central Illinois. One of the company’s customers, who was leading the project in Africa, invited him to be a part of the project.

“In the past, he had been a part of these projects across the Middle East,” said Steinacher.

The project was founded by the Illinois Rotary Association, in conjunction with Rotary International and the Rotary Club in Zambia, Africa. In Africa, the traveling team was supported by Africa Vision of Hope, which is based in Edwardsville, IL, and supports schools and orphanages in the African region. The group provided transportation and translators.

The group that traveled from Illinois worked with 11 African farmers in a village east of Lusaka, the country’s capital.

“The farmers we were working with are not involved in commercial farming, or even small scale farming as you would think of in the United States,” he said. “These farmers are members of a village who are given long term usage of land from the territory chief. These farms use all of their corn to feed their families, with very little sold on the open market are traded regionally.”

Steinacher said the goal was to evaluate what practices the farmers were using and train them to influence the crop they were getting ready to plant. The group took soil samples from each field to determine the pH levels and those of other nutrients. This information would provide insight to the foundation that the crop would need to be managed.

“At the end of this season, we would hope that our changes will produce more yield for them, which will take them down a path of more food stability,” he said. “They would only hand place a little bit of fertilizer near the seed in the furrow, so I explained to them how it’s the root system that not only provides structure, but it also pulls in the water and nutrients. We told them they should hand spread fertilizer in a circle around the seed, so all the roots could grow into the zones and take in more nutrients.”

The visiting agronomists took one acre of land for each farmer and lined up all of the seed, fertilizer and herbicide. Steinacher said they also found someone to hire to custom till the plot for each grower.

“We also purchased new planters for all of the growers, and we purchased one family an ox to plant and for tillage,” he said.

The traveling team is continuing to monitor the progress of the farmers they worked with and they will return to Africa as harvest approaches to determine the yield improvements and explain the increased value in the methods the visitors used.

“Our last night there, the African Vision of Hope students invited us to their school for a short program that included hearing stories from the students,” Steinacher said. “They also performed two traditional Zambian songs. Afterward, we had a social with the students where they could ask us questions about the United States and about our project with Zambian farmers.

Steinacher has worked for Agrigold since 2015. Prior to that time, he worked at GROWMARK/FS for about 10 years, doing agronomy sales and consulting. He said he believes his WIU education gave him a strong foundation to build on.

“While at WIU, I took an international ag class that helped me open my mind to other countries and cultures,” he said. “At WIU, I was also a member of Alpha Gamma Rho, and it was this organization that helped me learn the value of professional networking. It was this network that aligned me with the customer who invited me to take this trip with him and his team.”

For more information about the School of Agriculture at WIU, visit wiu.edu/agriculture.

Nominations open for Pig Farmer of the Year