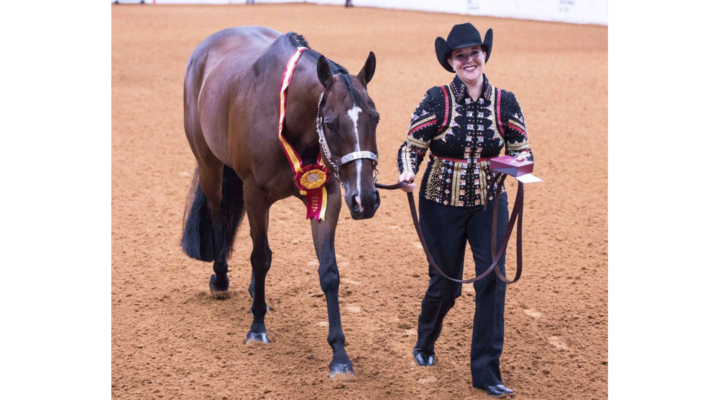 Jessica (Bryan) Heyen, of Mt. Pulaski, Ill., received her bachelor’s degree in agriculture from WIU in 2011.

“In order to qualify for this show, you must show at two APHA events from the previous July to the current June,” she said.

Heyen has been showing horses locally since she was 5 years old, but began showing in Novice Amateur events, which is the basic, beginner level for adults, five years ago. She then moved up to the Amateur and Open events four years ago, which prompted her to attempt to qualify for the World Show.

“For people who competitively show paints, the World Show is everyone’s goal to reach for,” she said. “Two years ago, this show was just a dream of mine, watching the livestream to see the best of the best, crying with the people who won titles (most of whom I didn’t know at the time) and thinking I would never be good enough to go.”

The first year Heyen showed her horse, “Noah,” she placed fifth in the nation in the amateur standings and eighth in the open overall standings.

After her graduation from WIU, Heyen was hired by ADM. She now works for Crop Risk Services in Decatur, IL, and said she believes WIU provided the groundwork to get her started.

“At one time, while at WIU, I was the president of Sigma Alpha, worked at Woodrum Automotive, and was a full-time student,” she said. “Having these responsibilities to juggle and prioritize, tremendously helped shape me for my career/home life balance. I’m sure that if it wasn’t for the industry knowledge obtained at WIU, I would not be where I am today.”

Heyen said she stays in touch with numerous WIU alumni and worked with several at both of her employers.

“My favorite memories of WIU were how much of a close-knit group the entire School of Agriculture was,” she said. “We worked hard, but we also knew how to have fun and I felt like we were all there for each other. John Carlson, Kevin Bacon, Mark Hoge and Joel Gruver were some of my favorite faculty, each with completely different teaching styles and personalities, but they each made their classes unique and a fun experience for the students.”