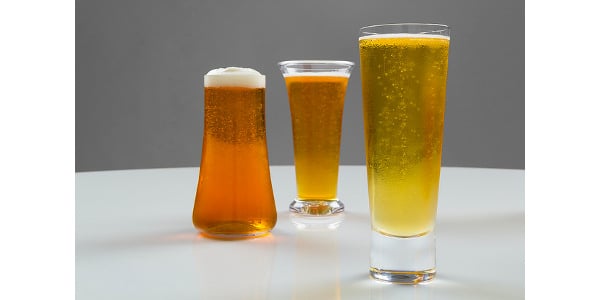 Using a modified, lower temperature mashing procedure to retain enzyme activity, brewers can use malts from gluten-free grains to produce high-quality beers, according to Penn State researchers who conducted a new study. (Didriks via Flickr)

The research promises to result in brewers using gluten-free grains such as teff, sorghum, rice, millet, corn and buckwheat to produce better-tasting beer for consumers with celiac disease or other gluten intolerances. To date, gluten-free beers are generally regarded as inferior in taste and body because they are produced using syrups and sugars introduced during the mashing process.

“Strategies to produce gluten-free beers commonly rely on adding enzymes to perform the hydrolysis,” he said. “In this study, we determined that the optimum pH of the enzymes from gluten-free malts is similar to those already typically targeted for barley mashes, but that a lower mashing temperature is required as the enzymes exhibited low thermostability at common mashing temperatures.”

“But we believe that the low enzyme activity was not the primary limiting factor, rather the mashing procedures used for barley in conventional beer production are sub-optimal for gluten-free malts,” said Ledley, who worked as a brewer in a craft brewery for more than a year prior to conducting the research. “We thought that gluten-free malts could be utilized successfully if improved mashing procedures were developed.”

Findings of this study, recently published in Beverages, demonstrate that gluten-free malts can produce high fermentable sugar concentrations without requiring enzyme supplementation. Penn State has applied for a provisional patent for the “ExGM Decoction Mashing Procedure” developed in the research. The process, which retains enzyme activity, is a modified brewing procedure using gluten-free malts that produces high fermentable sugar concentrations.

Interestingly, Ledley revealed that one of the inspirations for this research was finding out that one of his brothers is gluten sensitive and can no longer drink most beers. That motivated him to dig into the issue.

“Beer is traditionally derived from barley, wheat or rye — which are gluten-containing grains,” he said.

“Gluten is a complex set of proteins that persist through the brewing process. Research has been conducted to remove these proteins from beer using separation, filtration or enzymatic methods. But while these treatments are effective at reducing gluten levels, the safety of these treated beers for gluten-sensitive individuals is not certain.”

In the long run, Ledley, who says he has a passion for brewing beer, wants to see the conversation around gluten-free beer change, and he hopes his work can play a major role. His doctoral thesis will focus on producing high-quality beers from gluten-free grains. He is encouraged by the taste of several experimental prototypes he concocted over the summer.

“For me, there are two parts of this,” he said. “It would be great to make a product for individuals who can’t have gluten, but my hope is that I can get brewers to use these ingredients just to make drinkable beers. So, if they make a delicious beer out of sorghum, millet or teff that just happens to be gluten-free, they’ll promote it that way rather than framing it as gluten-free first. I want to move to a space where we don’t have to use the qualifier, ‘it’s pretty good for a gluten-free beer.’ I want, ‘it’s a good beer that just happens to be gluten-free.’”

Make it a Pennsylvania Thanksgiving