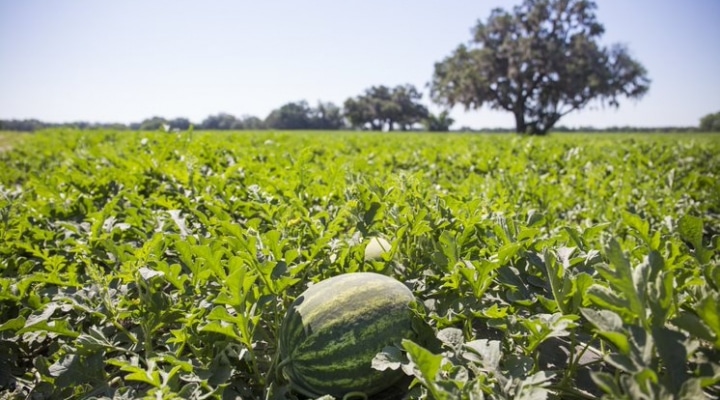 Today, as fruit and vegetable farmers in South Florida decide what to do with produce once destined for now-closed schools and restaurants, watermelon farmers in North Florida have recently finished planting their crop. (photo by Camila Guillen, UF/IFAS)

GAINESVILLE, Fla. — Today, as fruit and vegetable farmers in South Florida decide what to do with produce once destined for now-closed schools and restaurants, watermelon farmers in North Florida have recently finished planting their crop.

Given the uncertainty around the market for fresh produce, the decision to plant came down to economics, said Mark Warren, agriculture agent for UF/IFAS Extension Levy County.

“For many, this crop represents a large portion of their annual income, and they have already invested in land rent, tillage, fertilizer, seed, transplant costs, irrigation and plastic mulch,” Warren said.

Watermelons are an important part of the economy in Levy and surrounding counties. According to the 2017 USDA Census of Agriculture, Levy County has the largest acreage of watermelons in the state, with Gilchrist a close second. More than 20% of the state’s watermelon crop is produced in these two counties.

Florida itself is the No. 1 producer of watermelons in the United States. But as the coronavirus pandemic creates a new normal across the country, it’s unclear whether stores and consumers will be buying this favorite summertime treat when the watermelons are ready for harvest in May and June.

Blair Beauchamp says life on his Levy County farm hasn’t changed much since the pandemic, but the uncertainty of the situation has touched him just like everyone else.

“Farming is still farming—you’ve got to look after your crops, feed the cattle. But whether you’re talking about watermelons, beef or the stock market, it’s all uncertain and everyone is nervous,” said Beauchamp, a fifth-generation farmer who grows about 145 acres of watermelon each year and ranches cattle, as well. He manages the watermelon operation with Aaron Lane.

Beauchamp sells his watermelon through a broker, who distributes his product to supermarkets in the northeastern United States. With a warm March in North Florida, the watermelon crop will likely be ready for harvest in early May, about two weeks earlier than usual, he said.

“I hope by then the situation with the market for fresh produce is clearer,” he said. Until then, Warren and Bob Hochmuth, assistant director of the UF/IFAS North Florida Research and Education Center – Suwannee Valley, and other county Extension agents in the region are advising watermelon producers through group text or email messages on disease issues, irrigation and fertilizer recommendations to help ensure the success of their crop.

In addition, farmers can share photographs via their mobile device with their Extension agents to get an early start on diagnosis. “We just have to be more creative and use technology more to help our growers,” Hochmuth said

“Watermelons are a short season and potentially temperamental crop that requires a close eye and timely decisions,” Warren said. “A small disease or pest issue discovered this morning can reach destructive levels in a matter of hours. Farmers require dependable analytical support from IFAS soil and plant diagnostic labs to correctly make these kinds of timely decisions, which is why those labs are still operating and receiving samples by mail.”
For now, this year’s watermelon crops appear to have few disease or pest issues, Hochmuth said.

While social distancing has meant Extension agents are working with farmers in different ways than they usually do, Beauchamp said he’s glad to still have UF/IFAS as a resources for his business.

“My hat’s off to them for all they’ve done to stay in communication and serve us as the situation and safety allows,” he said.
Consumers can help Florida farmers affected by the uncertainty brought on by COVID-19, Warren said.

“Even if we do everything we can to produce a crop, success for our farmers doesn’t happen until the crop is sold and delivered. Consumers can help farmers in these uncertain times by asking for and buying Florida-grown produce,” Warren said.