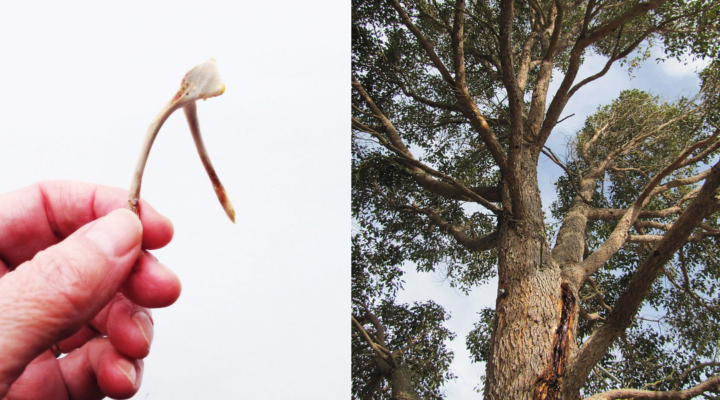 WASHINGTON — Breaking a wishbone, some believe, may impart good fortune to the one left with the bigger half. When a tree splits, though, everyone loses. Fortunately, by engaging a tree-care professional, we can control whether or not a Y-shaped tree splits.

Growing up, our family’s Thanksgiving traditions were well balanced. First we ate a lot, but after dinner my two brothers and I engaged in vigorous exercise for thirty minutes or so. That’s usually how long it took to tussle over which two boys would get to break the turkey’s wishbone. Of course sometimes it backfired if the loser cried loudly enough that they got promoted to the wishbone-pulling team. Following the event, further “exercise” might ensue if there were strong feelings about the fairness of said match. Luckily, bone breakage was restricted to cooked poultry, and we brothers remain on good terms.

The Y-shaped furcula, or wishbone as normal folks call it, is unique to birds, and breaking it to determine who gets the larger of the two halves – and thus the wish or good luck – goes back a few thousand years. Reportedly there are subtle ways to influence who gets the better half, but these were unknown to us as kids.

Even if your Thanksgiving rituals do not include breaking a wishbone, we’ve all seen trees that fork in a similar way. Unlike a wishbone, however, there is no lucky outcome for anyone in such situations, because trees which divide into two roughly equal-size stems or trunks are doomed to split. The narrower the angle at which the two trunks divide, the weaker the union is, but the chances of splitting always increase with age.

To some extent, a propensity for multiple trunks is genetic. In a forest environment, trees with poor structure split during wind or ice-load events. It is nature’s way of picking trees with better genetics (or luck, sometimes) to live longer and seed future forests. This selection process is great for woodlands, but not for trees growing in our yards, streets and parks.

We are the “unnatural selection” force responsible for choosing which trees get planted, and where. It takes a lot of effort, expense and time to have a shade tree reach maturity, and we want to keep them around as long as possible.

All trees have imperfections, the vast majority of which are benign. But some can be dangerous. To avoid breakage of large limbs, and associated flying lawsuits and debris, trees with obvious defects are often removed as a matter of course. Since many tree problems are a result of our activities, it hardly seems fair to send a mature shade tree to that great arboretum in the sky if we can find an alternative.

Somewhere there must be a cute little town called Narrow Forks. Where trees are concerned, this is the name of a problem that occurs when the angle of attachment between two competing (codominant) trunks is acute, rather than cute. The strongest attachments are open and closer to U-shaped. Narrow forks or unions get weaker with age and eventually fail. Major, often catastrophic, splits occur during ice storms, microbursts and other violent weather.

When you have a priceless target such as a Fabergé egg or a children’s play area that is within striking distance of a “wishbone” tree, corrective action is needed. Thanksgiving to Easter is the best period in which to have your landscape trees professionally evaluated, because tree architecture is easier to see when the leaves are off. A tree in very bad shape may need to be removed, but oftentimes, judicious pruning along with an appropriate cable system can save it.

Cabling must be done right, because a poorly designed system is more dangerous than none. The American National Standards Institute (ANSI) A300 Support System Standards for tree cabling are not an example of big-government overreach. Quite the opposite; they are industry-written, and based on decades of research. The ANSI A300 lays out specs for things like cable, bolt and eye size, construction, and load-rating. It’s critical that a cable system be installed by a Certified Arborist who is familiar with these standards.

Lest you fear your maple or oak will look like a Frankentree, don’t worry: a proper cable system is inconspicuous. For a fraction of the cost of a removal, and a tiny fraction of the cost of emergency removal plus home-damage repair, most trees can get an extended lease on life through cabling. While under extreme conditions even a perfect system may fail, I’ve never seen a properly installed cable system fail. I have, on the other hand, seen many homemade or substandard ones crash.

For information on cabling, contact your local International Society of Arboriculture (ISA) Certified Arborist (treesaregood.org has a search-by-ZIP function). When you get a quote from a professional, ask them to show you their copy of the ANSI A300 cabling standards, and insist on proof of insurance directly from their carrier.

It’s an appropriate time to give thanks for strong forks, both at the table and out in the landscape.

Paul Hetzler has been an ISA-Certified Arborist since 1996, and is a member of ISA-Ontario, the Canadian Institute of Forestry, and the Society of American Foresters. His book “Shady Characters: Plant Vampires, Caterpillar Soup, Leprechaun Trees and Other Hilarities of the Natural World,” is available on amazon.com.

Gather 'round the Drool Log with Beef. It's What's For Dinner.