Home / WeatherTrends / Winter makes its presence known
A new user experience is coming! We'll be asking you to login to your Morning Ag Clips account March 1st to access these new features.
We can't wait to share them with you! Read more here. 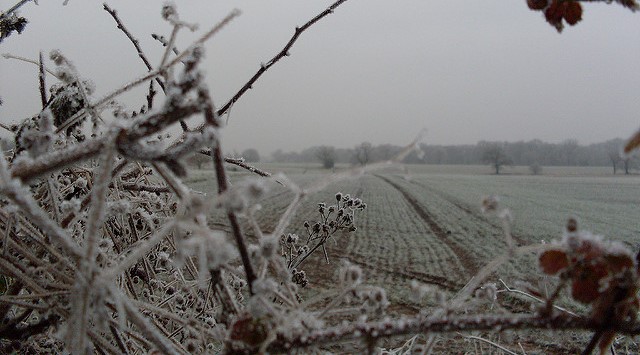 While many in the Midwest battled multiple days with highs struggling to reach double digits and windchills well below zero, below freezing temperatures reached all the way down to the Gulf Coast. (ClaireDPhotography, Flickr/Creative Commons)

Winter arrived back on December 21st and took little time to make its presence known in the Central and Eastern US. In late December, frigid arctic air plunged into the Central and Eastern US, dropping temperatures significantly below normal for this time of year. While many in the Midwest battled multiple days with highs struggling to reach double digits and windchills well below zero, below freezing temperatures reached all the way down to the Gulf Coast. Meanwhile, the Southwestern portion of the country has been receiving above normal temperatures so far this winter. Temperature rankings since the first day of winter across the US are as follows:

Southeast: 5th coldest in 27+ years, -5.7F below normal for the region

South Central: 2nd coldest in 27+ years, -8.2F below normal for the region

Rocky Mnts: 8thwarmest in 27+ years, +1.4F above normal for the region

Northwest: 7th coldest in 27+ years, -2.3F below normal for the region

Southwest: 3rd warmest in 27+ years, +3.9F above normal for the region

This cold air will stick around for the next several days, but many could see some relief by early next week for at least a day or 2. However, colder temperatures are forecast to once again spread across the North Central and Eastern US by mid to late week. 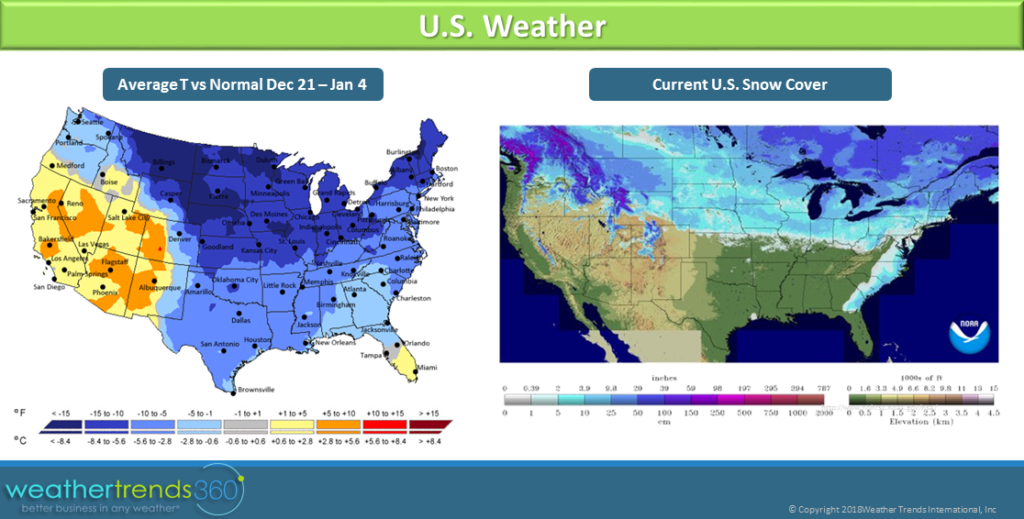 Accompanying these cold temperatures have also been several snow storms in the North Central and Northeastern US. Currently, 42.3% of the country is covered by snow and little of that will melt away over the next several days. Unfortunately for those without current snow cover, this cold streak could be very damaging to the winter wheat crop. States such as Kansas, Oklahoma, Missouri, and southern Illinois did not have snow cover when the coldest of the temperatures hit, leaving the crop susceptible to winterkill. Damage will not be fully assessed until the spring time when the now-dormant crop begins growing again.

Earlier this week, portions of the coastal Southeastern US received several inches of snow as a coastal low pressure system formed off the Florida coast. While often an escape from winter’s wrath, even northern Florida received snow from this system. Today, Thursday 1/4, the Mid-Atlantic is receiving snow from this system, with the heaviest amounts near the coast and a rather sharp gradient for snow totals as you move inland. Maryland, Delaware, and New Jersey coasts were all under a Blizzard Warning as of Thursday. The system will continue tracking northward, beginning to impact New England later today and into tomorrow. Strong winds, like those along the MD, DE, and NJ coasts, have prompted Blizzard Warnings for much of coastal New England as well. As the East Coast handles this new snowfall, the Midwest will be mostly snow-free for the next couple days. Early next week, there is the potential for new accumulating snowfall in the Midwest and once again in the Northeast.