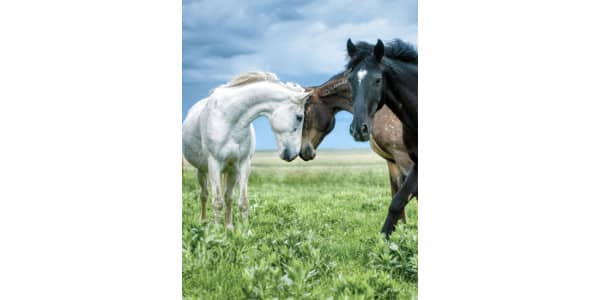 TOPEKA, Kan. — Winners have been announced for the ninth annual Ranchland Trust of Kansas (RTK) photography contest, which concluded September 30.

Dave Leiker of Emporia was the grand prize winner in this year’s contest. His photo was taken at the Vestring Ranch south of Cassoday when he was on assignment for Kansas! Magazine.

“After I was let out of a pickup truck at the edge of the pasture, I walked across the grassland, moving quietly into their group as I studied their response. When I was low and quiet curiosity would draw them in toward me. If I stood and moved toward them, they would move away. Soon I felt like I could orchestrate their movements to get variety and action for the camera,” said Leiker.

He was drawn to a bond between two of the horses and watched for expressive moments as he captured his grand prize winning image.

“I found it beautiful how one pair moved together, a couple times displaying the head-press at the heart of this photograph. It was a good moment and I’m glad I could share it this way,” Leiker added.

Crystal Socha of Augusta won the Fan Favorite category by receiving 663 votes on RTK’s Facebook page. Her winning photo, titled “Caught in the Storm” was taken in Morris County. The photograph truly depicts what it is like to be cowboy for a day.

Socha said, “We were moving cattle this spring to summer pasture. We got hit by a massive storm while on a couple thousand acres. It was not only pouring rain, but high winds, lighting and hail.”

A record number of photographs were submitted to the contest this year. The panel of judges narrowed the selection down to a top 25 for the Fan Favorite category voting on Facebook. All other category winners were chosen by the panel of judges, along with RTK and Wolfe’s Camera representatives. The Facebook album was able to reach over 43,000 Facebook users and nearly 6,000 votes were cast for the Fan Favorite category. Thank you to all who viewed and voted for these beautiful Kansas photos.

Prizes, sponsored by Wolfe’s Camera of Topeka, are awarded to the top 10 winning photographers. The photographs will be used, with permission of the photographers, to promote Kansas’ ranching heritage and open spaces.

RTK will have photo stationery cards for sale throughout the year featuring the 10 winning photos. Printed on premium cardstock, the folded cards are blank inside and come in packs of 10 with white envelopes. The card packages can be purchased for $20 directly from RTK’s website www.ranchlandtrustofkansas.org or contact Samantha Weishaar at samantha@kla.org.

RTK is an agricultural land trust affiliate of the Kansas Livestock Association, with a mission to preserve Kansas’ ranching heritage and open spaces for future generations through the conservation of working landscapes.