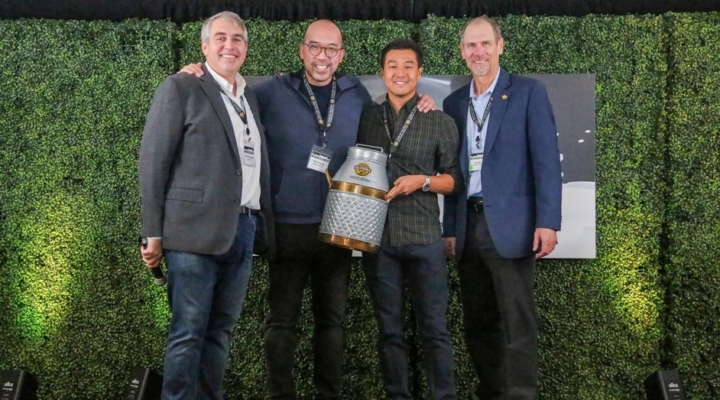 TRACY, Calif. — Bears Nutrition and its innovative, milk-based nutritional shakes for children was named the grand prize winner today of the Real California Milk Accelerator dairy startup competition. The competition, sponsored by the California Milk Advisory Board (CMAB) and powered by leading innovation consultancy VentureFuel, Inc., will provide Bears Nutrition with $250,000 in resources and funding to bring their fortified milk beverages to market.

As presented by co-founders David Sheu and Kevin Yeung, Bears Nutrition focuses on helping active kids grow. The winning product is a daily milk-based beverage fortified with protein, vitamins, minerals, and omega 3’s designed specifically for children aged three and older. It was created when Yeung’s son, Bear, stopped growing when his hockey performance started to take off. When a clinical nutritionist prescribed milk, and “lots of it”, with some added nutrients, Bears Nutrition’s shakes were born. The products currently have limited distribution in Europe and China but the founders look forward to expanding throughout the U.S. with Real California Milk at the core.

“Our mission at Bears is to help kids reach their full growth potential and we believe milk is a cornerstone to achieve that mission,” said David Sheu, CEO and co-Founder of Bears Nutrition. “With the help of the CMAB, we look forward to making milk a staple in kids’ routines again.”

The Milk Accelerator competition was designed to inspire innovation and investment in fluid milk products, packaging and capacity within California by connecting manufacturers, producers, investors, ideas and entrepreneurs for high quality, sustainable dairy beverages. Alongside eight other finalists, Bears Nutrition was judged on taste, nutritional value, packaging innovation, sustainability, and the ability to scale by a live panel of judges from the dairy, consumer packaged goods, and investor communities including business, industry and academic influencers. Bears Nutrition was one of nine finalists that each received up to $25,000 of support to develop protocepts while receiving elite mentorship from marketing, packaging, and distribution experts.

“The innovation we’ve seen from these nine incredible finalists has shown that we’ve barely tapped the natural goodness of dairy milk and what can be done to create products relevant to consumers today,” said John Talbot, CEO of the CMAB. “Not only are we excited to provide consumers with a healthy, greattasting new beverage option by helping to bring Bears Nutrition shakes to market, but we also look forward to seeing what the other finalists are able to achieve with the support they’ve received through this program.”

“This collaboration between VentureFuel and the CMAB is a great demonstration of the heights that are possible when influential organizations in major industries collaborate with startups; we can accelerate growth and jump-start innovation in new ways that can not only influence consumer perception, but help redefine an industry,” said Fred Schoenberg, CEO and Founder of VentureFuel.

More than 1,200 family dairy farms produce the milk found in fluid milk, cheese, butter, yogurt, ice cream and other dairy products identified by the Real California Milk seal – which will soon include Bears Nutrition beverages. California is the number one producer of fluid milk, butter and ice cream in the U.S. and the second largest producer of cheese and yogurt.

Additional information on the winner and competition finalists is available at:
https://www.venturefuel.net/milk-accelerator.