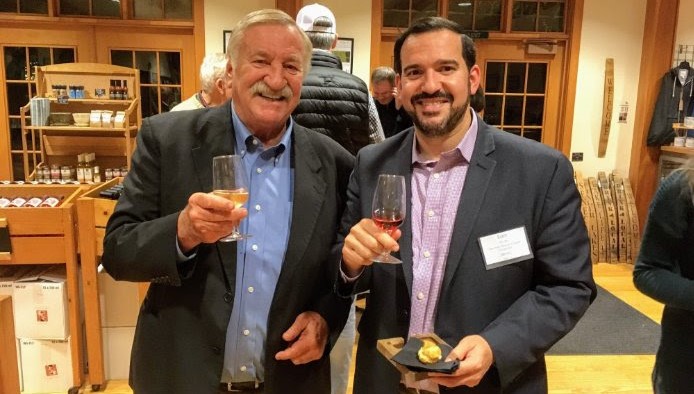 DUNDEE, N.Y. — WineAmerica, the National Association of American Wineries, held its annual Fall Retreat in the fabulous Finger Lakes of upstate New York. The event was sponsored by the Seneca Lake Wine Trail and the New York Wine & Grape Foundation, with additional support from the Finger Lakes Wine Alliance.

Along with meetings of the Board and State and Regional Association Advisory Council, WineAmerica used the occasion to unveil its revamped website. Streamlined to better serve its membership and the public, the website hosts the issues which WineAmerica is currently advocating for in Washington, D.C., including: excise tax reform, trade and tariffs, agricultural labor, and music licensing. The design and execution was performed by web designer Mari Kane, The Studio.

Headquarters for the three-day Retreat was the Inn at Glenora, a 30-room upscale facility with sweeping views of Seneca Lake and the Veraisons restaurant, all affiliated with the renowned Glenora Wine Cellars (www.glenora.com). The Finger Lakes region has been rated the #1 wine country tourist destination two years in a row by the USA Today Readers Pool, and has received increasing acclaim as a top-quality wine region, especially for its Rieslings.

“It was a real pleasure having our Fall Retreat in the Finger Lakes,” said Marty Clubb, Chairman of the Board and owner/winemaker of L’Ecole No. 41 in Walla Walla, Washington, where the Retreat was held a few years ago. “Moving these meetings around the country is a great way to learn about the industry we serve, and the Finger Lakes was a real eye-opening experience. We’re grateful for their hospitality—and all the great wines.”

WineAmerica has always had a strong member presence in the Finger Lakes. The association was founded in the region in 1978 as the Association of American Vintners. WineAmerica also has close ties to the rest of the New York wine industry with support from the Finger Lakes Wine Alliance, Long Island Wine Council, New York Wine & Grape Foundation, New York Wine Industry Alliance, and Seneca Lake Wine Trail.

“I was delighted to welcome my WineAmerica colleagues from throughout the country to my neighborhood,” said WineAmerica President Jim Trezise, who lives and works on Keuka Lake and for over 30 years ran the New York Wine & Grape Foundation which he co-created in 1985. “The scenery, the wines, and especially the people are second to none, as confirmed by the comments of our colleagues from other states.”

Tuesday morning began with a breakfast which included regional winery owners as well as WineAmerica delegates, followed by an information session on the importance of public policy to the success for the wine industry. “From Doom to Boom: The New York Story” showed out-of-state visitors how the Empire State’s wine industry has exploded due to a close public-private partnership. Then WineAmerica’s staff members and lobbyists described the current climate in Washington, as well as updates on the many issues the organization is working on for the industry. Finally, members of WineAmerica’s State and Regional Associations Advisory Council (SRAAC) described the public policy environment and initiatives in California, Maryland, Ohio, and Washington. In short, it was a comprehensive information exchange.

The Finger Lakes Wine Alliance provided a selection of Riesling and Cabernet Franc wines to accompany lunch, with Executive Director Carmela Barbagallo describing the group’s mission and activities. Then the WineAmerica delegates split into groups that spent the afternoon visiting Seneca Lake wineries..

Wednesday morning was back to business with the Board of Directors meeting, followed by the rest of the SRAAC roundtable reports. The formal meeting concluded with a presentation by Dr. Tim Martinson, Statewide Director of Cornell Cooperative Extension, describing the close and vital relationship between Cornell and the grape and wine industry. A number of WineAmerica attendees added a day or two to their visits to explore more FLX wineries and other attractions, including Cornell.

The next WineAmerica Board meeting will be held June 2-4, 2020 in Washington, DC.