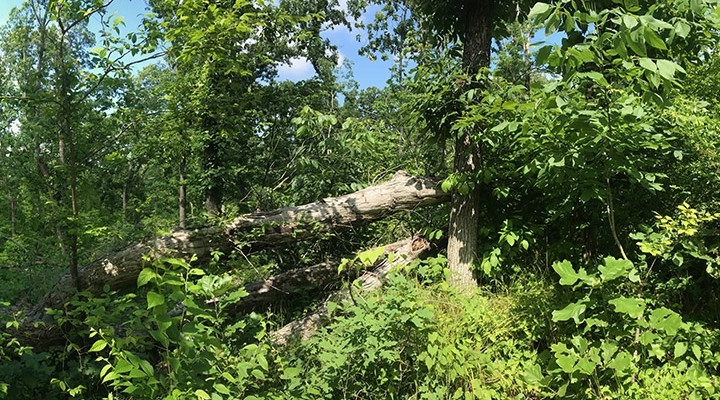 Less than a year after a devastating tornado, invasive plants have moved in. (Melissa Daniels)

URBANA, Ill. – When tornadoes touch down, we brace for news of property damage, injuries, and loss of life, but the high-speed wind storms wreak environmental havoc, too. They can cut through massive swaths of forest, destroying trees and wildlife habitat, and opening up opportunities for invasive species to gain ground.

A new University of Illinois study, published in the Journal of Ecology, shows that large blowdown areas in southern Illinois forests are more heavily invaded and slower to recover than smaller areas. The research guides management decisions for windstorm-prone forests.

“We used satellite imagery and grueling on-the-ground surveys to look at what was happening with invasive plants after a series of windstorms – a tornado in 2006, a derecho in 2009, and another tornado in 2017 – hit southern Illinois forests,” says Eric Larson, assistant professor in the Department of Natural Resources and Environmental Sciences at U of I and co-author on the study. “We assume the forest recovers and those invaders get shaded out, but they may not. They could potentially prevent forest recovery or spread into surrounding areas.”

Melissa Daniels, a former graduate student who led the project, adds, “Forest health impacts all of us. Forests provide a lot of important ecosystem services, including biodiversity and carbon sequestration, things that are important for our well-being as a society. We should all care about phenomena that impact our forests.”

Larson and Daniels identified blowdown areas after each of the three storms using Landsat satellite imagery. For each affected area, the team identified a matching forest parcel, similar in tree type, size, elevation, slope, and distance to roads and trails, that had not been impacted by storms. Then Daniels visited all 62 sites in the summer of 2018 to survey for invasive plants.

“It was hands-down one of the most difficult things I’ve ever done, and I do a lot of difficult things, like ski mountaineering, long backpacking trips, and mountain climbing. Illinois summers are brutal, but they’re even more difficult when you are walking up steep hills, climbing over logs that are half your height, pulling off two dozen ticks a day, and battling stinging nettle and poison ivy,” Daniels says. “But it’s so beautiful and we were seeing places that most people will never see.”

Once she reached the sites, Daniels identified and measured invasive plant cover and took readings of the tree canopy. It was immediately clear that storm-damaged areas, especially recent ones, were brighter and more open than unaffected sites, offering more light to understory invaders such as multiflora rose, Japanese honeysuckle, Amur honeysuckle, autumn olive, and Oriental bittersweet.

Comparing the storm-affected areas from 2006, 2009, and 2017, invasive species cover decreased and tree cover increased over time.

“Since invasive plants decreased over time, some might interpret that as the forest healing on its own, and that they don’t need to worry about it. The issue with that is, of our top five invaders, all of them demonstrate the ability to grow under closed canopy conditions. That means that even if they are being shaded out over time, they have the ability to spread into and persist in adjacent forest, potentially affecting forest regeneration,” Daniels says.

Not surprisingly, the storm-damaged areas also were significantly more invaded than unaffected matching parcels, even 12 years after the first tornado hit. And larger damaged parcels were slower to recover, both in terms of decreasing invasions and increasing tree cover. The results suggest a couple of practical management recommendations.

“If you need to preferentially spend money on invasive species management, it makes more sense to focus treatment in larger blowdown areas,” Daniels says. “We also found that the most common invaders in the blowdowns were also the most common invaders in unaffected forest, suggesting the disturbance is just releasing what’s already present in the system. Therefore, we recommend land managers focus their treatment on the most abundant invasives in their system.”

The article, “Effects of forest windstorm disturbance on invasive plants in protected areas of southern Illinois, USA,” is published in the Journal of Ecology[DOI: 10.1111/1365-2745.13254]. Melissa Daniels and Eric Larson co-authored the paper. The research was funded by a USDA NIFA McIntire-Stennis grant. The Department of Natural Resources and Environmental Sciences is part of the College of Agricultural, Consumer and Environmental Sciences at Illinois.