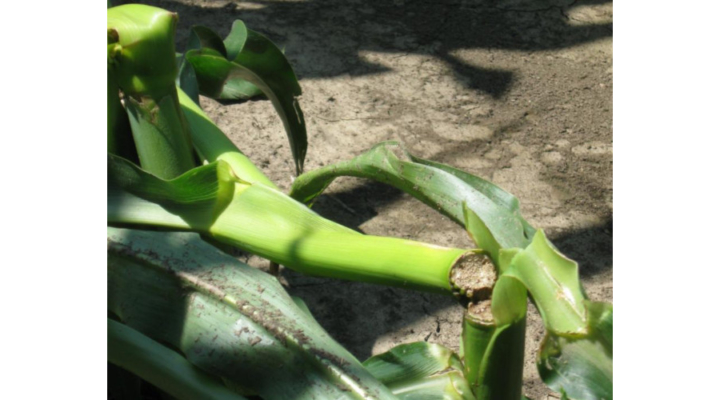 Green snap injury near the ground will result in plants that won’t produce grain. (Courtesy Photo)

Root lodging occurs when strong winds pull corn roots part way out of the soil. The problem is more pronounced when soil is saturated by heavy rains accompanying winds. If root lodging occurs before grain fill, plants usually recover at least partly by “kneeing up.” This response results in the characteristic gooseneck bend in the lower stalk with brace roots providing above ground support. If this stalk bending takes place before pollination, there may be little effect on yield.

When lodging occurs later in the season, some yield decrease due to partial loss of root activity and reduced light interception may occur. If root lodging occurs shortly before or during pollen shed and pollination, it may interfere with effective fertilization thereby reducing kernel set. For more on root lodging associated with saturated soil conditions see https://agcrops.osu.edu/newsletter/corn-newsletter/201917/ponding-and-saturated-soils-results-recent-ohio-corn-research

Another wind related problem to watch is green snap or “brittle snap.” These are terms used to characterize pre-tassel stalk breakage caused by wind. Corn plants are more prone to green snap during the rapid elongation stage of growth between V8 and tasseling, especially during the two-week period prior to tasseling (variable corn development in many fields this year may have limited green snap damage from recent wind storms).  Breaks in the stalk usually occur at nodes (along nodal plates) below the ear.

When soil moisture and temperature conditions are favorable for growth during this stage of plant development, plants elongate rapidly but stalks are unusually brittle. Stalk brittleness is greatest in rapidly growing corn under high temperature, high soil moisture conditions. There is speculation that rapidly growing plants are more susceptible to snapping-off for several days during the few weeks before tasseling because there has been little time for plants to develop lignified tissues at the nodes.

Vulnerability to green snap damage varies among hybrids. However, all hybrids are at risk from such wind injury when they are growing rapidly prior to tasseling. It is often the most productive fields with the highest yield potential that experienced the greatest green snap injury. Factors promoting rapid growth early in the growing season also predispose corn to greater green snap injury.